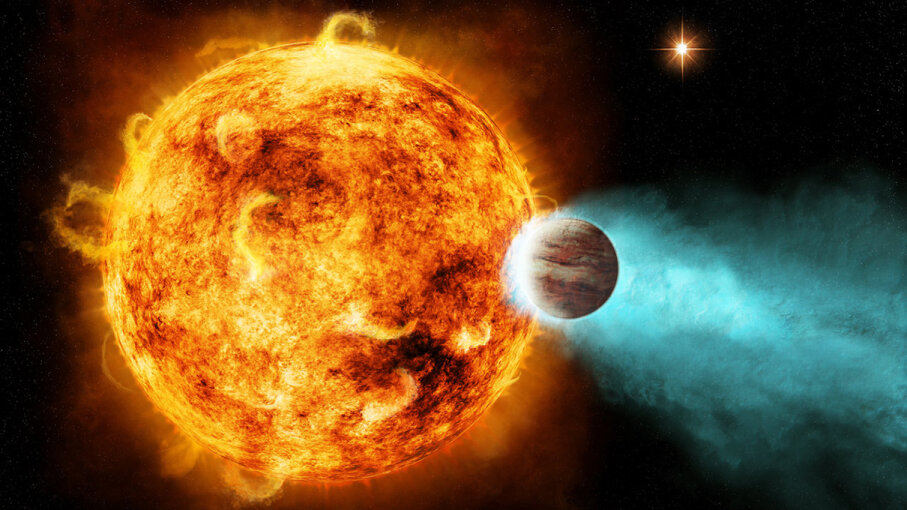 Hot-Jupiters, like the one named CoRoT-2b pictured here orbiting close to its host star, aren't uncommon. What's very unusual about NGTS-1b is the tiny size of its host star. NASA/Ames/JPL-Caltech

Just in time for Halloween, astronomers announced the discovery of an exoplanetary "monster" lurking around a tiny star.

Called NGTS-1b, the alien world orbits a star around 600 light-years from Earth and has been measured to be approximately the same size as Jupiter but 20 percent less massive. Its orbit is extreme. Known as a "hot-Jupiter," this exoplanet whips around its star once every 2.6 days and has a surface temperature of 530 degrees Celsius (nearly 1,000 degrees Fahrenheit).

So far, this might not sound very remarkable. Many hot-Jupiters have been discovered with extremely compact orbits in our galaxy. But NGTS-1b's star is a puny "class M" star — otherwise known as a red dwarf — and, according to planetary formation models, it shouldn't be possible for such a tiny star to support such a huge planetary heavyweight.

In fact, this is the largest planet compared to the size of its star ever found in our universe, and its very existence is perplexing astronomers.

"The discovery of NGTS-1b was a complete surprise to us – such massive planets were not thought to exist around such small stars," said Daniel Bayliss, who works at the University of Warwick, U.K., in a statement. "This is the first exoplanet we have found with our new NGTS facility and we are already challenging the received wisdom of how planets form."

Bayliss' team used the brand-new Next-Generation Transit Survey (NGTS) to make the discovery, which was no mean feat. Red dwarfs are extremely dim and small stars, so they can be difficult to observe, but they are the most abundant type of star in the Milky Way and are known to host their own planetary systems. However, none have been found to possess worlds of such monstrous proportions as NGTS-1b.

"NGTS-1b was difficult to find, despite being a monster of a planet, because its parent star is small and faint," said Peter Wheatley, also in the press release. Wheatley, who also works at the University of Warwick and leads the NGTS project, continued, "Small stars are actually the most common in the universe, so it is possible that there are many of these giant planets waiting to [be] found."

A star forms when a clump of molecular gas in interstellar space starts to collapse under its own gravity. When the material becomes dense enough, fusion occurs, creating a protostar. As the protostar evolves, leftover material will settle into a spinning protoplanetary disk – the raw material that will go on to become planets. The size of the star is proportional to how much material was available during its formation – the more material, the bigger the star. This logic also holds true for the planets that develop in the protoplanetary disk – the more material, the more massive the planets.

Red dwarfs are known to play host to small rocky exoplanets, a fact that makes these locations very interesting in the search for habitable "Earth-like" exoplanets. But there shouldn't be enough material available during the creation of red dwarfs to allow the formation of giant, Jupiter-class planets in the protoplanetary disk. This is where NGTS-1b defies planetary formation models; it's there, it's big and theory says it shouldn't exist.

"Our challenge is to now find out how common these types of planets are in the galaxy, and with the new NGTS facility we are well-placed to do just that," added Bayliss, who co-led a study publishing in the journal Monthly Notices of the Royal Astronomical Society.

NGTS resides at the European Southern Observatory's Paranal Observatory in Chile and is carrying out a wide-field survey of small K- and M-type stars. The survey is sensitive to red light, a wavelength that small, dim stars strongly emit.

A night-time long-exposure view of the Next-Generation Transit Survey, which is tasked with finding exoplanets via the transit method.
ESO/G. Lambert

Using the "transit method" to discover exoplanets, the system watches stars for slight dips in their brightness, a sign that an exoplanet orbited in front of its host star. In the case of NGTS-1b, the star's light dimmed once every 2.6 days, which relates to the monster world's orbital period. Once the telescopes detect the exoplanet, astronomers can estimate the size of the transiting exoplanet, and follow-up studies by other observatories can measure the exoplanet's mass by looking at the "wobble" of its host star.

Now that this oddball star system has been discovered, astronomers hope to find more examples, so they can understand how massive worlds like NGTS-1b evolve around tiny red dwarfs.

"Having worked for almost a decade to develop the NGTS telescope array, it is thrilling to see it picking out new and unexpected types of planets," added Wheatley. "I'm looking forward to seeing what other kinds of exciting new planets we can turn up."

Now That's Interesting
Although NGTS-1b might be big compared with its host star, it's minute when compared with the most massive exoplanet listed in NASA's Exoplanet Archive. DENIS-P J082303.1-491201 b, which is 28.5 times the mass of Jupiter, is so massive that astronomers think that it might be a brown dwarf, an object also known as a "failed star" rather than a superheavyweight planet.