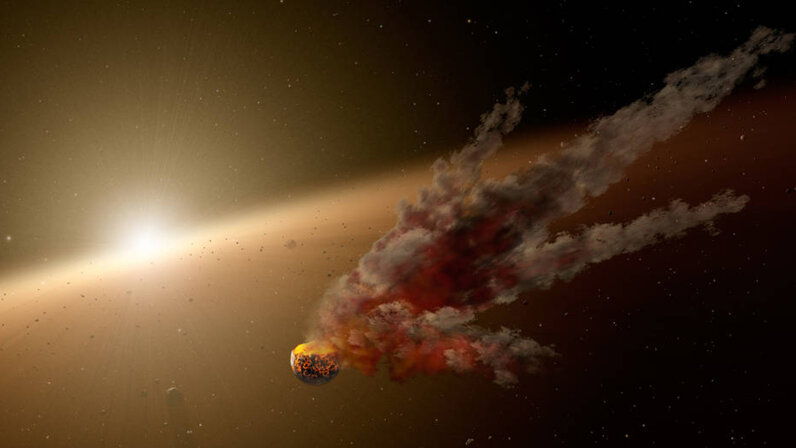 This artist's concept from NASA shows an epic smash-up between an asteroid and a protoplanet. An ancient protoplanet in our own solar system appears to be the origin for a rare type of meteorite called ureilites. NASA/JPL-Caltech

Most chunks of space rock found on our planet belong to families of meteorites that can be traced back to a common origin. For instance, shergottite, nakhlite and chassignite (SNC) meteorites are remnants of Martian crust that were blasted from the red planet's surface early in the solar system's history.

But ureilites? No one knew exactly where they came from.

"Ureilites are one of the main families of achondritic meteorites and their parent body is believed to have been catastrophically disrupted by an impact during the first 10 million years of the solar system," researchers write in a study published in the journal Nature Communications on April 17.

Now a famous asteroid called 2008 TC3 is helping researchers to clear up things around ureilites. The 13-foot-wide (4-meter-wide) asteroid hit Earth and exploded in the atmosphere over the Sudanese Nubian Desert in 2008, producing a fall of meteorites (Almahata Sitta ureilites) that were collected after impact.

The contrail left by 2008 TCS during its descent
Shaddad/NASA

The researchers gathered microscopic clues from 2008 TC3 only to realize that this kind of meteorite didn't come from a known object. Rather it likely originated from a baby planet, or protoplanet, that's long gone from our solar system.

We have discovered over 480 ureilites on Earth, so we know these meteorites are rich in carbon and, sometimes, peppered with tiny diamonds. Diamond, as we all know, is just a fancy form of crystallized carbon that develops after being exposed to extreme pressures, and natural diamonds contain permanent markers that can reveal details of their history. So, the diamonds in ureilites helped scientists to figure out where these mystery meteorites might have come from.

Using transmission electron microscopy (TEM) — a technique that fires a beam of electrons through a specimen to create a precise image of the microscopic structures in the material — researchers at EPFL's Interdisciplinary Centre for Electron Microscopy in Switzerland zoomed into the larger diamonds (measuring 100 microns in diameter; or roughly the thickness of a sheet of paper) embedded in a Almahata Sitta ureilite to study its inclusions. Inclusions are microscopic crystalline impurities that are found inside diamonds. They discovered chromite, phosphate and iron-nickel sulfide inclusions embedded in the samples and arrived at a startling conclusion (more on that in a second).

After scrutinizing the inclusions in the larger diamonds, the researchers found that the diamonds were most likely formed by a steady pressure of 20 GPa (giga-pascals). That's the kind of pressure that can only be sustained inside a planetary body between the masses of Mercury and Mars.

Smaller diamonds in the sample also told the (shocking) story of the violent impact that blasted the chunks off their parent body.

All this means ureilite meteorites like the Almahata Sitta samples came from a protoplanetary body early in the solar system's history that's since disappeared. Our young solar system was a mess of planetary impacts and dynamical instability in its first few million years, so this object is no longer there. It may have been pulverized into oblivion or, more likely, ejected from our star system after undergoing a gravitational encounter with another planet.

But how do we know ureilites don't originate from the known planets? According to Cecile Hebert, co-investigator of the study, it's "because the composition of those meteorites differs significantly from that of the remaining telluric planets," he says.

In other words, ureilites have a very different — indeed alien — composition when compared with the known, silicate-rich (telluric) planets in our solar system.

Now That's Interesting
Asteroid 2008 TC3 was the first asteroid that astronomers detected before impact (by the NASA-funded Catalina Sky Survey for near-Earth objects). They also correctly predicted its time of impact and approximate location.