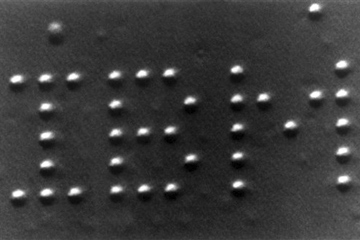 The nanoscale world is almost unimaginably small. A nanometer is just one-billionth of a meter. Engineers and scientists have been working with material on this scale for a few years. For example, some of the most powerful microprocessors have millions of transistors just a few dozen nanometers wide.

In medicine, doctors and engineers are working together to create nanoscopic drug delivery systems to fight diseases like cancer. The goal is to build a viruslike module that can seek out cancerous cells. The module will contain a payload of cancer-killing drugs. Proteins on the module will act as a guidance system, turning the module into the equivalent of a smart bomb. By targeting specific cancer cells, doctors hope to minimize the negative effects of cancer treatments.

But the real holy grail for nanoscopic machines is the assembler. An assembler is a hypothetical nanoscopic machine that can build things molecule by molecule. Millions of these assemblers could build practically anything given the right raw materials. We call this type of engineering molecular nanotechnology.

We're not there yet. Most of the devices we've built are on the micro scale. A micrometer is one-millionth of a meter -- significantly larger than a nanometer. These devices are far too large to manipulate individual atoms, because the atomic scale is even smaller than the nanoscale. Atoms vary in size, but in general a single nanometer is a few atoms wide. We measure the size of atoms in angstroms. One angstrom is one-tenth the length of a nanometer.

That's not to say we can't manipulate individual atoms using other tools. In 1990, IBM engineers manipulated atoms using a scanning tunneling microscope. They arranged atoms on a metal surface to spell IBM. While the microscope itself wasn't nanoscopic, it has a very fine stylus with a point that is just one atom in size.

Will we ever built nanoscopic devices that can move atoms around? The answer is uncertain. Some scientists and engineers say the molecular nanotechnology concept isn't plausible. Many turn to manipulating atoms through chemistry rather than building a nanoscopic machine to build molecular chains. Even if we never build molecular assemblers, the knowledge we'll gain from trying may change the world.