Is Google going to space? 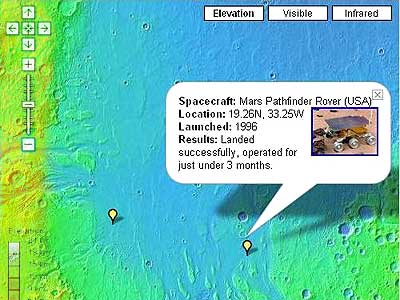 Google and NASA first announced their intentions to get together in September 2005. At that time, the expected fruits of the relationship seemed, at least to the lay person, to be mostly high-level: data processing and management, user-interface development, and "bio-info-nano convergence" that could lead to pretty major results like new sensors and space-travel technology. The effect of the partnership on the common man was almost a gloss-over. In December 2006, the effect on the common man is a central focus. A much-hyped announcement on December 18 has brought the "Sweet!" factor of this partnership to the forefront: You're going to be able to do flyovers in space as easily as you can perform a search on Google.

The plan is for NASA to feed all sorts of data into Google's technology infrastructure, and Google in turn will create new tools to fully utilize the NASA data in a user-friendly interface. A lot of this data -- images, videos and tracking information compiled from the Hubble Space Telescope, the International Space Station, Shuttle missions, Mars rovers and countless other sources -- is already online, but it's scattered across various Web sites and isn't easy for the regular Joe to find. Some of the data is tucked away in NASA databases for lack of a good way to deploy it into the public realm. Google is going to be that easy path to the public realm, where anybody in the world will be able to instantly access all of the space-exploration information NASA has compiled since its inception. That includes photos, video and accompanying statistics from the Apollo missions all the way to the International Space Station repairs and the various attempts at landing surveillance equipment on Mars. And because Google is Google, you'll be able to do flyovers just above the surface of the moon.

There are already applications in use that have come out of this partnership and ones like it. In Google Earth, clicking on a point on the planet brings up National Geographic information related to that location; and in the wake of Hurricane Katrina, anyone with an Internet connection could locate and zoom in on disaster-relief locations. Both of these features are the result of the Global Connection Project, a partnership between Google, NASA, National Geographic and Carnegie Mellon University. And the unbelievable Google Mars application draws directly on NASA data to let users tour the surface of Mars, see landmarks and geologic features and view where spacecraft have landed on the planet (and learn what happened to them), among other features.

Google Mars is a good example of where this partnership can go in terms of giving the general public access to the fruits of NASA's decades of space exploration.

One future application announced at a recent science symposium is called iEarth, which is a NASA-built program that utilizes Google Earth to bring extensive climate data into a visual, interactive forum. Using the iEarth application in Google Earth, you'll be able to view NASA's climate data as 3-D imagery superimposed on Google's photographic maps. You'll pick a point on Earth and travel from ground level up through the troposphere and stratosphere and into space, viewing all sorts of real-time climate imagery and data on the way, including temperature, air composition and other information collected by NASA's climate satellites and weather balloons.

If we're lucky, we'll begin to see some new NASA-Google applications in 2008.

For more information on the Nasa/Google partnership and related topics, check out the following links: