Why is NASA playing with marbles? 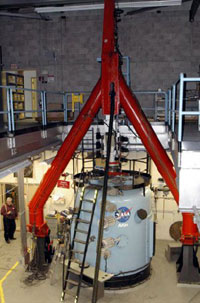 Bill Cooke, NASA scientist, is regularly shooting marbles into carefully arranged piles of soil. Each marble explodes on impact with a spectacular blast of light and leaves a nice-looking crater in the soil. Why is NASA paying this man to do something most of us would do for free? First, most of us are not qualified to propel marbles for NASA. And second, Mr. Cooke is gathering all sorts of mathematical data from his marble adventure. He's planning for our return to the moon.

If you think about how much space stuff hits the atmosphere-protected Earth on a regular basis, you can begin to imagine how many meteoroids and comet-expelled projectiles smash into the moon every day. The moon has no atmosphere protecting it. Anything can hit the moon, completely unhindered. So while a meteoroid the size of a softball in space would never even make it to Earth's surface -- it would burn up completely in Earth's atmosphere -- that same meteoroid is still the size of a softball when it smashes into the moon. And when it does, it explodes with the force of about 150 pounds (70 kg) of TNT. That's a regular occurrence. Cooke estimates that at least once a week or so, a larger meteoroid strikes the moon. When a rock about 10 inches (25 cm) across, traveling at about 85,000 mph (38 km/s), hit the moon on May 2, 2006, it exploded with the energy of 4 tons of TNT and left a crater about 46 feet (14 meters) wide and 10 feet (3 meters) deep.

Here's where Cooke's marble experiments come in. Cooke is the scientist who figured out the specs for the May 2 moon explosion that NASA captured on video (see NASA: A Meteoroid Hits the Moon to watch the video). Based on the crater dimensions and the light produced by the impact -- the length of the flash and its brightness level -- Cooke determined the size and travel speed of the meteoroid and the amount of energy released in the explosion. These are all critical details to understanding the threats posed to astronauts on the moon and the base they plan to build there, which will act as a departure point for Mars missions. Cooke's current experiment experiments use Pyrex glass marbles and NASA's Ames Vertical Gun Range (AVGR).

NASA originally developed the AVGR to provide data support for the 1960s Apollo missions to the moon. Since then, it has been used to simulate impacts for all sorts of research, including the planning for the successful Deep Impact mission that smashed an impactor into a comet to get at the material inside. The gun is massive -- the chamber alone is 8.2 feet (2.5 meters) tall and 8.2 feet in diameter. It can accommodate two different propulsion systems based on the research needs: either smokeless powder that directly propels a projectile into the launch tube; or smokeless powder that drives a piston that compresses hydrogen gas, which then acts as the propellant. The AVGR can propel all sorts of 0.3-caliber projectiles at up to 16,000 miles per hour (7 km/s). The projectile is typically fired from a vacuum-sealed space in the gun, and that space can be filled with a variety of gasses to simulate the particular atmosphere the researchers are studying. In this case, Cooke and his colleagues are firing the marbles from a vacuum, since the moon has no atmosphere of its own.

In each experiment, they fire a marble into an arrangement of soil that approximates the composition of the moon's surface. The marble travels at 16,000 mph and explodes on impact.

Cooke's team then studies the crater size and the amount of light produced in the explosion using different configurations in order to get a better grasp on the video data coming in from actual moon-based explosions.

A crater after a test shot, 11 inches (30 cm) in diameter
Image courtesy NASA

They record each impact using high-speed cameras and light meters. By creating a set of equations that can accurately portray and analyze a moon impact, scienctists can better gauge what's happening in the moon-based explosions they catch on video and estimate the frequency with which a notable meteoroid hits the moon and how much damage it causes.

Ultimately, the goal is to get a very good idea of the actual risks facing astronauts and structures on the moon. If we're going to be there a while, it'd be nice to know how many incoming space bombs to expect.

For more information on moon missions, the Ames Vertical Gun Range and related topics, check out the following links: