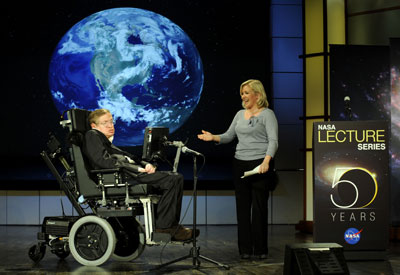 Dr. Stephen Hawking, professor of mathematics at the University of Cambridge, and his daughter Lucy Hawking give a speech entitled "Why We Should Go Into Space" on April 21, 2008, in Washington, D.C.
Paul E. Alers/NASA/Getty Images

In 2008, the National Aeronautics and Space Administration (NASA) celebrates its 50th anniversary. The organization actually has two reasons to recognize its existence -- although Congress officially created NASA on July 29, 1958, the United States began launching satellites into orbit by Jan. 31 of that same year.

This might explain why NASA isn't focusing on one particular date for its celebrations. Instead, it's throwing a yearlong birthday bash in the form of Future Forums, conferences held about once a month in several cities across America, including Seattle; Columbus, Ohio; St. Louis; Miami; San Jose, Calif.; Boston and Chicago. Along with recognizing the 50th anniversary, the programs, according to NASA, "discuss the role of space exploration in advancing science, engineering, technology, education and the economy that benefits [the] community and the nation" [source: NASA]. While looking back on NASA's history, presentations will also focus on the future, such as planned trips back to the moon and potential travels to other interstellar destinations.

Part of NASA's anniversary also involves keeping up with the present. In December 2007, NASA's Web site received a significant redesign to commemorate the milestone. Older versions of the site, despite offering lots of information about the program, were simple in nature -- you could click around from one page to the next and read about technology and present missions, but that was about it. The redesign offers visitors a new organization and a more interactive experience, one that usually appeals to the 18- to 25-year-old set known as the MySpace generation.

Why might NASA jump onto the social networking bandwagon? What does a big government space program gain from appealing to a younger crowd? Is space camp just not that popular anymore? Is this just some bad pun on "space"? To learn about NASA's new foray into the wild and woolly world of Web 2.0, read the next page. 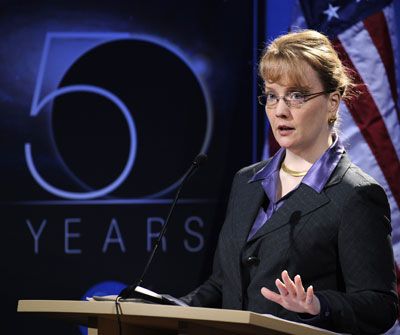 Why Does Jupiter Have 79 Moons When Earth Just Has One?
Tiny Yet Mighty: Neutron Stars May Be Ravenous X-ray Dazzlers
The 1965 Valensole UFO Encounter