by Jennifer Horton
Prev NEXT
5 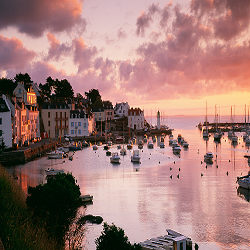 The largest country in Western Europe, France has topped International Living's Quality of Life Index three years in a row [source: International Living Perfect Place]. From its sprawling grape orchards and numerous beaches to its snow-capped peaks and gently rolling hills, France does seem to have it all. Where weather is concerned, at least, it does.

With two mountain ranges and water bordering three of its sides, France is practically guaranteed to have climatic variation. In the north, the weather is on the temperate side, with cool winters and mild summers, but as you near the Mediterranean coast, the summers get much hotter. The mountain regions in the Pyrenees and the Alps, meanwhile, experience heavy snow and much colder temperatures. Winter in these regions is so idyllic that the country has been host to three winter Olympics, including the first one in 1924 [source: Olympic.org].

The climate is appealing to more than just France's people, too. With more than half of its land under cultivation, this agriculturally- rich country is the leading exporter of food in the European Union and the largest wine producer in the world. [source: National Geographic].

If you think a nice pasta dish would complement your wine, you're in luck. Next, we head to France's southern neighbor.