by Jennifer Horton
Prev NEXT
4 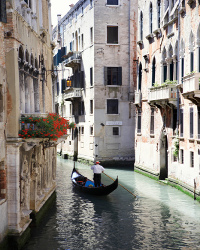 With its picturesque canals, Venice is among Italy's popular destinations.
Jeremy Maude/Thinkstock

While much of Italy is mountainous, you'll also find lowland plains and gorgeous coastlines. The Amalfi Coast, along the southwestern edge of the country, has even been recognized by the United Nations as a World Heritage site [source: National Geographic]. Apart from the mainland, Italy also includes more than 70 islands, including Sicily and Sardinia, and is home to the only active volcanoes in Europe [source: National Geographic, Topinka ].

For the most part, Italy has warm, dry summers and mild winters. But in the north, where the Alps are located, the climate is cold and wet. And in the far south, it's hot and dry. The warm south is also the country's agricultural center and is known by the Italians as the Mezzogiorno, or the land of the midday sun.

Our last European stop is just a short trip to the west.