by Jennifer Horton
Prev NEXT
3 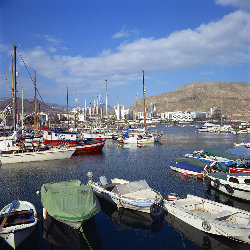 Los Cristianos harbor in Tenerife, Canary Islands. The islands are a top tourist spot for their temperate climes.
Creatas Images/Thinkstock

Located in southwestern Europe just north of Africa, Spain continues the trend of the previous countries and offers a little bit of everything. It borders three different bodies of water: the Bay of Biscay to the north, the Mediterranean Sea to the east and the North Atlantic to the south. It features the towering Pyrenees along its northern border with France, and it possesses many island communities scattered throughout the Mediterranean and Atlantic.

One of those groups of islands is, in fact, what landed Spain on our list. Located off the northwest coast of Africa, the Canary Islands are a top tourist destination due to their consistently pleasant temperatures that average between 64 degrees F (15 C) in winter and 75 degrees F (24 C) in summer [source: Strawberry World]. Yet they also play host to five distinct environmental zones, from sea level to snowy peaks, ensuring that the cold weather seekers won't go away disappointed. Mount Teide, a 12,198-foot (3,718-meter) volcanic peak on the island of Tenerife, for instance, is a popular skiing destination that gets up to three months of snow per year [source: CIA World Factbook, Strawberry World].

You'll also find snow in the next country on our list, along with fertile plains, deserts, mountains and rainforests ….