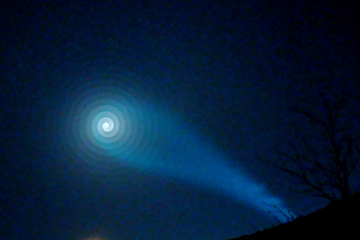 This picture taken on Dec. 9, 2009, shows an unusual light phenomenon above the Norwegian city of Skjervoy.
Anita Olsen/AFP/Getty Images

Say you're minding your own business, going about your regular routine and having a generally pleasant evening. You're about to step outside for a nighttime walk before you think to yourself, "Oh, perhaps I might take a little peek at the weather to ensure a dry stroll." (You talk fancy in your daydreams!)

Staring at the sky, expecting to find the usual, you instead see a bright spot in the sky, which spins out in a crazy spiral of misty clouds. "Oh, my word," you think. "It appears that aliens are attacking!" Noticing no laser beam weapons or calls to take anyone to anyone else's leader, you revise your statement. "It appears instead that a chemical explosion is happening in the sky!" Observing no allergic reaction, you try again. "Uh, a weird storm? A trick of the eye? General dementia or insanity?" Finally, you probably settle somewhere closer to, "What in the world is that crazy thing?"

In December 2009, Norwegians found themselves looking at the night sky, no doubt wondering what in the world that crazy cloudy spiral was. What they saw was a strange kind of light show as a giant shimmering coil twisted in the dark. It was a really beautiful sight, and it didn't end up causing any harm -- but what was it?

Sorry, UFO seekers. It wasn't a visit from galactic neighbors or a signal from an interstellar would-be friend. It wasn't even a weather phenomenon, which many would assume because, you know, sky stuff? In reality, it was just a boring old plume of missile propellant.

Hm. Are missiles boring? Pretty much never. So let's get down to the nitty-gritty. What does a missile have to do with a gigantic light-up pinwheel in the sky? Let's start with the Russian missile test launch that took place that night -- emphasis on test, because it failed. What seemed to happen was that the missile made its way far above the atmosphere, where a motor fired off sideways -- leaving spiral arms of pluming propellant drifting in the sky. Enhancing the visual affect was aluminum oxide, which, when added to the propellant, creates a bluish hue when observed through light [source: Murphy].

No time traveling wormhole. No alien invaders. Not even a covert weapon attack. Instead, the cloud spiral phenomenon proved to be a failed missile test. But hey, let's celebrate the fact that such a cool display existed at all.