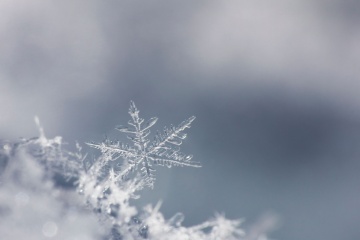 One snowflake can contain a quintillion molecules.
© Marccophoto/iStock/Thinkstock

Physics and weather conditions determine snowflake shape and size. Math determines that those flakes are unique.

Consider that each snowflake is made up of a huge number of water molecules. By one estimate, a flake may have as many as a quintillion molecules [source: Washington Post]. Because each little branch of a snowflake can spawn many others, there are dozens and dozens of ways for various crystalline features to join. There are so many possible arrangements that some scientists say there are two times as many possible crystal combinations as there are atoms in the whole universe [source: The Naked Scientists].

Those kinds of numbers are so large that we can't really even comprehend them. But if the math holds, those numbers mean it's awfully unlikely that any two snowflakes have ever been or will ever be exactly alike.

Furthermore, there are all kinds of other factors at play in snowflake formation at any given instance. Even the tiniest fluctuation in temperature and humidity alters crystal construction. Minute impurities like flecks of dust change the crystals, too. The angles at which water molecules collide with existing crystals matter as well.

In the swirling atmosphere miles above the Earth's surface, all of these variables ceaselessly change. Conditions that hold in one small space are just a tiny bit different than those inches in any direction, and all of it transforms crystals and their subsequent snowflakes in infinite ways.

Snowflakes smash into each other as they zoom and swoop through the air. Where their branches shatter, new ones form, adding to the uniqueness of every translucent little flake.

So snowflakes really are nearly infinite in their specialness. They're tiny and ephemeral testaments of the strange and constant change in the world and universe all around us.

As I researched this article, I was amazed to read that the largest snowflakes in history were roughly 15 inches wide. Of course, there's no concrete evidence that those enormous flakes existed. But scientists say that huge snowflakes of around 6 inches do routinely fall all over our planet, so it seems reasonable that with the right conditions they could get even bigger. If I'm ever lucky enough to see snowflakes that are almost as big as basketballs, I don't know if I'd be excited or terrified... but it would definitely be an unforgettable experience.