Browse the article Is humid air heavier than dry air? 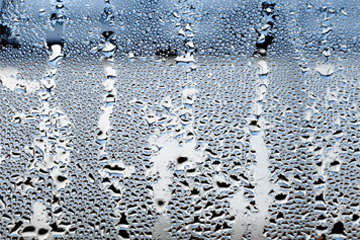 When it's hot and humid out, the air just feels heavier, but it's not.
Carlos Sanchez/ThinkStock

Here's the problem with all my facts (aside from the biggest problem, which is that I didn't bother to test them outside of my imagination): They all concern water, not water vapor. And it's water vapor that makes air humid, not actual drops of water. And once we understand how water vapor molecules work, we'll be able to prove the real truth, which is that humid air is actually lighter than dry air.

Let's start with Avogadro's law. This basic law of chemistry states that equal volumes of gases at the same temperature and pressure contain an equal number of molecules [source: Williams]. So it doesn't matter what the molecules weigh; it just matters that you have the same volume. And since the air in our atmosphere moves freely, molecules can float in and out.

So there you go. If temperature and pressure are the same, dry air will be heavier because it lacks the lighter water vapor molecules. And keep in mind that it's the interplay between dry and humid air that causes big storms. When dry, dense air moves under moist, light air, it lifts the moist air and makes the right conditions for thunderstorms. This "dry line" area -- where dry air pushes up humid air -- is seen right where you'd expect it: in the Tornado Alley of the southern-central United States [source: Schrage].