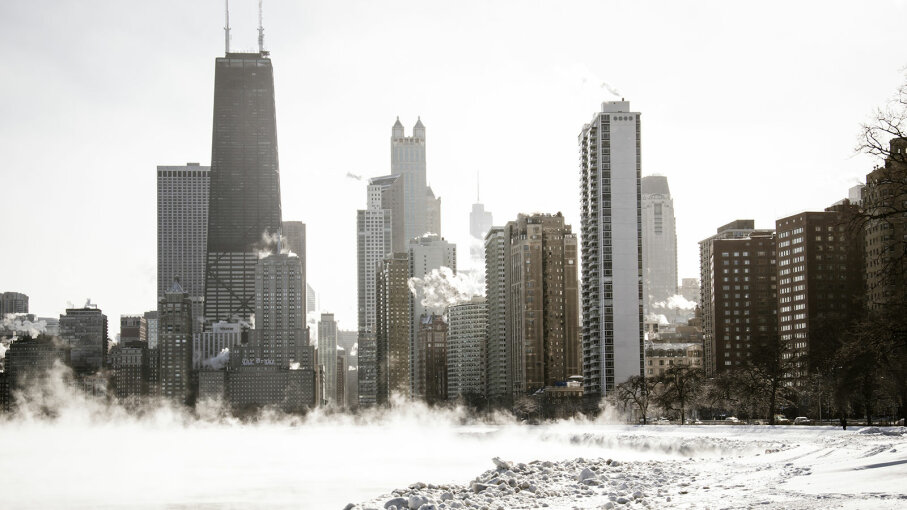 Steam rises from Lake Michigan toward the Chicago skyline on a day when the temperature was -18 and -43 with the wind chill. The polar vortex was blamed for the very cold temperatures in 2014. Flickr Vision

When the winter temperature abruptly plunges to a brutally cold low, your car is buried under ice-encrusted snow, and you're shivering despite wearing thermal underwear, a wool sweater and a down parka, it probably doesn't help much to hear the TV meteorologist cheerfully explain that the cause of your misery is a distortion of something called the polar vortex. That sublimely ominous term might sound to you like the name of a giant monster with freezing-cold breath, the sort you'd see battling Godzilla in a 1950s Japanese sci-fi movie. You'd say, "Huh?" if only your teeth would stop rattling.

Indeed, many people heard of the polar vortex for the first time in January 2014, when temperatures plunged to life-threatening lows -- in some places, 60 degrees Fahrenheit below zero (minus 51 degrees Celsius) when windchill was factored in -- across the Midwest and Northeast U.S. Conditions were so dire that even in hardy Minnesota, the state's governor closed the schools to protect children from exposure to the cold [source: O'Brien and Palmer]. The term got another workout when some of the coldest temperatures in a generation hit the U.S. in January 2019. Some 90 million Americans experienced temperatures of below zero F (-18 C) [source: CNN].

However, the polar vortex really isn't anything new to scientists. The polar vortex actually is a seasonal atmospheric phenomenon, a system of strong, high-level winds -- called the jet stream -- surrounding an extremely cold pocket of Arctic air. And while it might sound like a malevolent force of nature, the polar vortex for the most part is a pretty good thing, because its winds usually form a boundary that keeps the cold air contained and prevents us from freezing [source: Duke].

The problem, though, is that once in a while, the polar vortex breaks down a little. The result is a big, powerful blast of Arctic air that can travel far south, causing the temperature to plunge in places accustomed to having mild winters [source: Duke]. In this article, we'll explain more about what the polar vortex is, and why it sometimes fluctuates.

How Does the Polar Vortex Work? 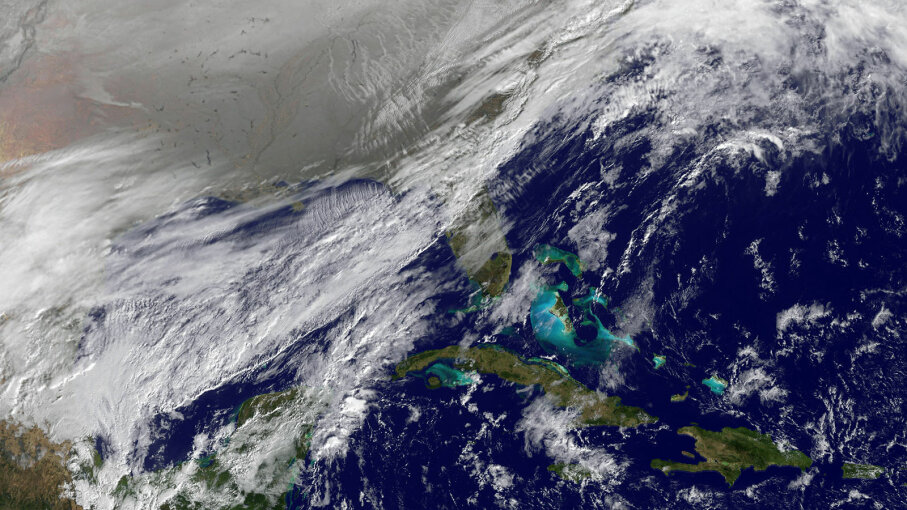 This satellite image shows the entry of a large area of low pressure from the polar vortex into the northern U.S. on Jan. 6, 2014. NOAA via Getty Images

These vortices exist because in the wintertime, the air that's high over the poles gets really, really cold -- we're talking on the order of close to 110 degrees below zero on the Fahrenheit scale or minus 79 degrees Celsius for the Northern Hemisphere [source: NASA]. That drastic contrast with the temperatures farther away from the pole, and the pressure contrast that results, cause really fast winds -- with speeds of between 120 and 250 miles (193 and 402 kilometers) per hour -- to swirl around the big pocket of cold air [sources: Rafferty, Rutgers Today]. The vortex in the Southern Hemisphere is even colder than the one in the Northern Hemisphere, has faster winds and also much lower ozone levels [source: NASA].

Either way, what results is a huge spinning cyclone with cold air inside it, which hangs high over the pole, almost like a halo [source: Herwick]. If you were looking at it from the side, it starts roughly around the border of the troposphere, the lowest level of the Earth's atmosphere and the region where our weather takes place -- and the stratosphere, the next atmospheric layer that begins at about 12 miles (20 kilometers) in altitude and contains the ozone that protects Earth from too much solar radiation.

The vortex reaches all the way through the stratosphere up to the mesosphere, the next layer, where the air starts to get thin and super-cold [source: NASA]. From a vantage point high above the North Pole, for example, the polar vortex actually would look like an ellipse, often swirling around two centers -- Canada's Baffin Island and a spot in northeast Siberia, and enclosing the icy edges of North America, Greenland, Europe and Asia [sources: AMS, NSIDC, O'Hanlon].

The polar vortex is weakest during the warmer months of the year, when there's less of a contrast between polar temperatures and those in warmer regions, and it tends to become the strongest in the winter months [source: Rafferty]. Usually, that barrier of winds keeps cold air in the Arctic, which prevents rest of the Northern Hemisphere from getting too chilly. But some years, it doesn't work quite as well at doing that. We'll get into the details in the next section.

What Happens When the Polar Vortex Becomes Distorted?

The polar vortex might sound like a pretty dependable natural system for regulating each hemisphere's climate. But in practice, it doesn't quite run that smoothly. For one thing, its shape typically is a bit irregular in its boundaries, with areas known as troughs where the cold air extends away from the pole, and other areas called ridges, where the warm air pokes toward it [source: Serreze].

Additionally, the high-speed winds that form the polar vortex's barrier can change in intensity from time to time. If the winds weaken too much, that can distort the vortex and make its boundaries even more irregular, so that a whole lot of cold air heads southward into places that don't normally get it [source: Duke].

While the polar vortex might seem like a shocking new phenomenon, cold snaps caused by distortions in the vortex actually have happened at other times in recent history. Back in January 1985, for example, the northern polar vortex was really distorted, and polar air pushed southward into the eastern U.S. In normally balmy Florida, the plunging temperatures destroyed 90 percent of the state's citrus crop. In Washington, D.C., the parade and outdoor ceremony for President Ronald Reagan's second inauguration had to be cancelled. Worse yet, at least 126 people died from the effects of the cold [source: NOAA].

In the wake of the January 2014 storm, radio commentator Rush Limbaugh claimed, perhaps facetiously, that the polar vortex was a term freshly made up by the news media to scare people into worrying about climate change. "They just created it for this week," he told listeners [source: RushLimbaugh.com]. In truth, the term has appeared in scientific articles dating back at least as far as the 1850s, and it started showing up in newspapers such as the Washington Post and the New York Times in the late 1980s [sources: Living Age, Herwick]. But thanks to Twitter, the Weather Channel and news Web sites, more people are aware of the polar vortex than ever before.

Is the Polar Vortex Affected by Climate Change?

You may have heard a climate change skeptic point to a cold snap as proof that the planet isn't actually warming. Proponents, however, note that climate change may actually be contributing to distortions of the polar vortices, and the sudden plunges in temperature that those distortions cause.

Here's the possible explanation. Scientists have observed that more and more Arctic sea ice is melting during the summer months. As the ice melts, the Arctic Ocean warms, and radiates that excess heat back to the atmosphere in winter. Because that heat somewhat reduces the contrast between the Arctic air and the atmosphere in regions farther south, it reduces the intensity of the winds that form the barrier between the two areas. That, in turn, weakens and disrupts the polar vortex. That hypothesis is supported by data taken over the past decade, which shows that in years when a lot of Arctic sea ice disappears, the vortex has a greater tendency to weaken [source: Fischetti].

Not everyone, it should be mentioned, embraces the notion that Arctic sea ice changes influence weather patterns elsewhere [source: Samenow]. But if it is true, the particularly scary part of that model is that while the amount of Arctic sea ice varies from year to year, overall it's been decreasing in recent years, and climate scientists' forecasts call for it to vanish even more. That could mean that we may experience more distortions of the polar vortex, and the extreme weather that accompanies them, in years to come [source: Fischetti].

I'm not a meteorologist or a climate scientist, but by virtue of having lived in the eastern U.S. for most of my life, I'm pretty familiar with really cold weather. The most extreme cold snap I think that I've ever seen, however, was a sudden ice storm in New York City in January 1994, which turned most of the Upper West Side into the equivalent of a hockey rink and brought traffic to a standstill. Since it was impossible to do anything productive, I spent the afternoon hanging out in a coffeehouse with some friends who normally would have been rushing from one meeting or project to another. So it all worked out OK.