Can you predict winter weather based on summer weather? 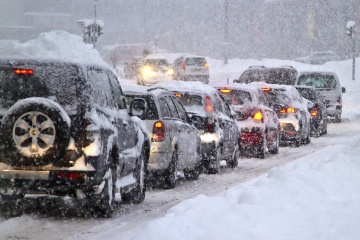 Just because you had a particularly rainy summer doesn’t mean your winter will look like this.
MarianVejcik/iStock/Thinkstock

Here's the good news: You can correctly predict an entire season of weather, months in advance, based on just about anything. The Old Farmer's Almanac will tell you all sorts of excellent ways to determine whether a winter is going to be difficult. For instance, just check the nape of your cow's neck. Is the hair thicker than normal? Uh-oh, get ready for snow! Oh, you don't have a cow's neck handy? Just check out whether you notice pigs gathering sticks [source: Geiger]. That's right! Pigs. Gathering sticks. The universal sign of a rough winter — or a sign they're building a porcine army to destroy your culture and all you hold dear.

The bad news? Even if you do experience a harsh winter after the Great Piggy Uprising, that correct prediction you read is still a result of chance. Because while climatologists and meteorologists use fancy science and climate data to see if we're in for a bad winter, it's not at all based on our summer months. There simply is no pattern that predicts a summer-to-winter conversion. In fact, even autumn calculations for a winter forecast are, by the forecasters' own admission, full of variables that prevent a reliably surefire prediction [source: Rudd "Cool"; Samenow].

That doesn't mean that people don't try. Lots of companies need to know information about the weather as soon as they can get their hands on it. Think about super weather-dependent industries, like viniculture or even utilities (power companies have a vested interest in knowing whether they're going to be facing a ton of downed power lines that winter).

So companies might hire meteorologists to predict a long-range forecast, but the scientists are going to be careful to point out the variables involved and to present several likely scenarios [source: Cohen; Samenow]. In other words, they're probably not going to say anything like, "Based on the fact that I spent the Fourth of July locked in my house waiting out a thunderstorm, I'm totally unwaveringly certain that a mild winter is written in the stars."

The National Weather Service has debunked the theory that a mild, wet summer equals a cold, snowy winter. After studying almost 100 years of data, experts found no evidence that a lame summer equals a gangbusters winter [source: NWS]. So, sorry, the long-term weather forecast will remain a surprise. But if you do see any pigs brandishing branches, might as well dig the snow shovel out from storage. Doesn't hurt to be prepared.

If Rainbows Are Circular, Why Do We Only See Arches?
'Pilot's Glory': Why a Rainbow Encircles an Airplane Shadow on Clouds
Weather Patterns Are Getting Stuck as Climate Changes Affect the Jet Stream