Partly Cloudy with a Chance of Chaos 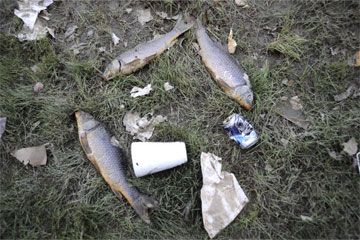 Despite our best efforts at predicting the weather, scenes like this -- near downtown Nashville, Tenn., on May 7, 2010, after the Cumberland Rive rose to its highest level in over 70 years -- remain a part of our future.
Jeff Gentner/Getty Images

You might think that the National Centers for Environmental Prediction's supercomputers could never make mistakes, but even their abilities aren't up to the enormous challenge of weather forecasting. That's because they must take into account several large-scale phenomena, each of which is governed by multiple variables and factors. For example, they must consider how the sun will heat the Earth's surface, how air pressure differences will form winds and how water-changing phases (from ice to water or water to vapor) will affect the flow of energy. They even have to try to calculate the effects of the planet's rotation in space, which moves the Earth's surface beneath the atmosphere. Small changes in any one variable in any one of these complex calculations can profoundly affect future weather.

In the 1960s, an MIT meteorologist by the name of Edward Lorenz came up with an apt description of this problem. He called it the butterfly effect, referring to how a butterfly flapping its wings in Asia could drastically alter the weather in New York City. Today, Lorenz is known as the father of chaos theory, a set of scientific principles describing highly complex systems, such as weather systems, where small changes in initial conditions radically change the final results. Because of chaos, there is a limit to how accurate weather forecasts can be. Lorenz set this limit at two weeks.

Modern meteorologists use state-of-the-art technology and techniques to tame chaos, such as the ensemble forecast, which consists of several forecasts, each one based on slightly different starting points. If each prediction in the ensemble looks the same, then the weather is likely to "behave." If any prediction looks radically different, then the weather is more likely to "misbehave."

Meteorologists also rely on Doppler radar to monitor weather conditions more effectively and improve forecasts. Doppler radar requires a transmitter to emit radio waves into the sky. The waves strike atmospheric objects and bounce back. Clouds moving away from the transmitter return different kinds of waves than clouds moving toward the transmitter. A computer in the radar converts data about the reflected radio waves into pictures showing cloud coverage and bands of precipitation, as well as wind speeds and direction.

Because of this technology, meteorologists can now predict the weather better than ever, especially when they limit how far they look into the future. For example, up to 12 hours out, meteorologists offer fairly reliable forecasts of general conditions and trends. Unfortunately, thanks to chaos, they will never be able to predict the weather with absolute certainty, which is how surprise storms -- tornadoes and torrential, flooding rains -- continue to devastate communities with little warning. For this reason, it might be best to carry an umbrella, even on days forecasted to be bright and sunny.