An aurora ranks as one of the most beautiful natural wonders of living on a planet with a global magnetic field, and space weather experts are getting closer to understanding one of the phenomenon's mysteries. You see, when an aurora lights up the Northern Hemisphere skies over the Arctic, the same pattern should erupt in the Southern Hemisphere skies over the Antarctic. But scientists noticed the two didn't match up after they compared simultaneous images of north and south auroras in 2009.

Why would we expect them to be symmetrical in the first place?

The aurora is a visible reminder of the epic interplay between the sun's magnetic field and Earth's global magnetic field, aka the magnetosphere. The sun constantly pumps out massive quantities of energized particles, such as protons, helium nuclei and trace heavy ions. Together, these particles are released into interplanetary space, washing over the planets as the solar wind.

Other solar phenomena, such as coronal mass ejections (or CMEs), erupt, blasting magnetized clouds of these particles into space at high speed. The solar wind, solar flares and CMEs, and the effects they have on our planet, are collectively known as "space weather." All this space weather can have powerful effects on our planet — and our technology — once it encounters our planet's magnetosphere.

One such effect is a geomagnetic storm. It can happen if the sun's magnetic field interacts with the magnetosphere in a certain way, injecting the magnetosphere with solar particles that create auroras. Auroras develop when these particles follow our planet's magnetic field to the poles, raining through the atmosphere. Depending on which atmospheric gases they hit, a beautifully colorful light display will occur.

Now, let's step back and imagine those textbook diagrams of bar magnets, with a north (N) and south (S) pole printed at each end. The magnetic field lines they create will trace out symmetrical loops connecting the north and south poles. This is an oversimplification of our planet's magnetic field, but the physics is the same.

As the sun rotates, it washes solar winds of different speeds over our local space neighborhood, and eruptions like flares and CMEs can create very dramatic and dynamic changes in interplanetary space. If the magnetic conditions are right, the sun can fling a bubble of magnetized particles at Earth that will be injected into the layers of the magnetosphere (imagining the layers of the magnetosphere like layers of onion skin isn't far from its actual structure). These particles are then swept back into the tail of the magnetosphere (aptly named the "magnetotail") where they are stored until the magnetotail undergoes reconnection events, releasing pressure and forcing the stored solar particles to flow along the magnetic field lines to Earth's atmosphere. Magnetic reconnection is a phenomenon where magnetic fields are forced together, snap like elastic and then reconnect, releasing energy, along with a massive surge of particles.

All things being equal, and remembering our simple bar magnet diagram described earlier, the field lines leading to the North and South poles of Earth should look the same, and equal amounts of particles should rain down in identical patterns over the Arctic and Antarctic. And this is where two new and complementary studies, published in the Journal of Geophysical Research: Space Physics and the journal Annales Geophysicae, come in.

In 2009, space weather experts compared the patterns of auroras erupting during a geomagnetic storm. What they saw was confusing; the patterns created were in different locations and had different shapes than predicted. At the time, they assumed this asymmetry was caused by the complexity of reconnection events in the magnetotail, sending differing quantities of charged particles to the North and South poles, thus creating the mismatch. However, these new studies indicate that the asymmetry may actually be caused by the orientation of IMF embedded in the streams of solar wind first encounters our planet's magnetosphere — something that the researchers call "asymmetric geospace."

We can imagine the sun's magnetic field as a series of lines randomly oriented, washing over Earth like shallow waves would wash over a pebble on a beach. If they have a magnetic north-south orientation that matches the north-south orientation of the magnetosphere, they will connect to Earth's magnetic field and sweep back, merging with the magnetotail, along with the solar wind particles they contain. In this case, the magnetotail will appear symmetric, and any auroras generated will also be symmetric. Patterns matched!

But what if the sun's magnetic field is oriented east-west relative to Earth's north-south field? According to these new studies, this can cause the magnetotail to become twisted and asymmetric. As you can probably guess, this will have an effect on the auroras that are produced, funnelling the solar particles in an asymmetric pattern and creating asymmetric auroras. Patterns not matched!

Over time, as increasingly more energy is released via reconnection in the magnetotail, it will untwist and these auroras slowly return to their symmetrical shape. This is counterintuitive. Space weather experts once assumed that the asymmetry used to be caused by magnetic reconnection. In reality, it seems that reconnection releases magnetic pressure to return the auroras to symmetry.

Now That's Interesting
Geomagnetic storms can generate powerful electrical disturbances around the globe, triggering power outages and communications blackouts. In our increasingly tech-dependent world, understanding space weather is paramount if we are to accurately predict, and prepare for, the impacts of the tumultuous environment surrounding our nearest star. 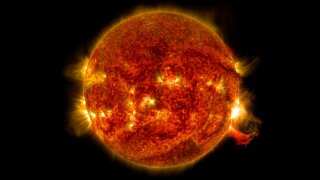 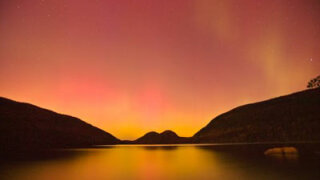 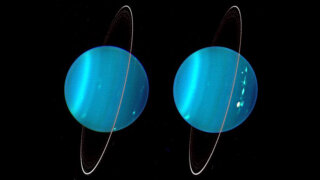