Tiny Louisiana Community Is Rapidly Vanishing Due to Rising Seas 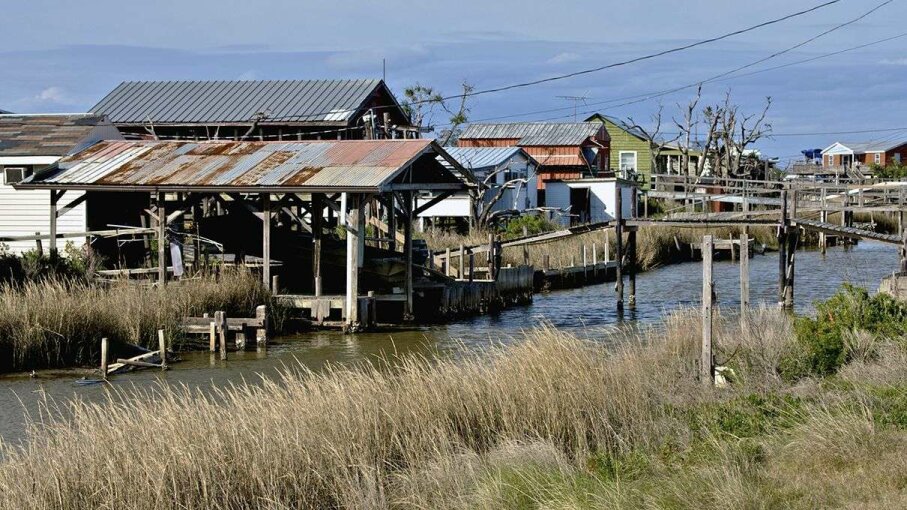 The people of Isle de Jean Charles have lived off the waters surrounding their small Louisiana town for nearly two centuries now. Soon the waters will take the town from them.

When that time comes, and nobody quite knows when it will, the people of Isle de Jean Charles hope to be somewhere safe and dry, somewhere where they can still be a family. That family is descended from a band of Native Americans, the Biloxi Chitimacha Choctaw, who fled to the area in the 1830s. They hope to be somewhere where the rising sea can't get to them, where the fury of hurricanes doesn't sting quite as much.

But right now, even with nearly $50 million earmarked to fund their move, that's all they have: hope.

A Local Crisis, a Global Challenge

"On the island road where you cross [into town], when I was growing up, there was land on both sides of the highway," Démé Naquin, a tribal member, told a forum run by House Democrats on May 17. "Now there's none. All there is, is a road."

Isle de Jean Charles, once 5 miles (8 kilometers) wide, is now little more than a spit of land in Terrebonne Parish, in the southernmost part of the state. A combination of factors have virtually erased the island: devastating hurricanes, rising sea levels that have poisoned what was once fresh water around the island, erosion that has made the land even more vulnerable to storms and, according to many, offshore oil drilling.

"The Vanishing Island," a nine-minute New York Times Op-Doc published in 2014 and embedded below, gives a sense of what the island is like now.

Isle de Jean Charles has lost 98 percent of its land in the last 60 years, said Naquin in that forum. In 2002, more than 300 people called the tiny islet home. Now, it's somewhere around 70. And their time is running out.

"With every storm, more people leave. It gets harder to rebuild with fewer community members there to offer mutual aid," Naquin said. "Our goal for tribal resettlement is to recreate a safe and family-oriented community for the residents of the island and reunite the tribal nation as a community, like it was when I was a child."

In January, the U.S. Department of Housing and Urban Development awarded Louisiana $92 million as part of the National Disaster Resilience Competition, a federal pool of funds designated for areas that experienced a major disaster during 2011-13. Some $48 million is to go to relocate the people of Isle de Jean Charles.

The idea is to build a new, sustainable community with the money, complete with energy-efficient housing for perhaps 400 people, a tribal center that can double as a hurricane evacuation center, central meeting areas, playgrounds and many other amenities. Sites have been scouted and designs drawn. The new town is to serve as a model for other climate-threatened areas all over the nation and, indeed, all over the world. In the House forum, the minister of foreign affairs for the Marshall Islands and a youth ambassador from Alaska told of the effects climate change is having on their homes.

Still, no one has been able to tap into the federal money just yet. No site has been picked. No one has packed a bag. The process of moving a town is taking a lot of time.

Unfortunately, time is something that the people of Isle de Jean Charles simply do not have.

"We thought we were finished with the treaties of the 1800s. We hope and pray that this is not, 'Another treaty made, another treaty broken.'"

The Fate of the Island

If the move happens, the relocated people already are being called "climate refugees," the first Americans to be forced from their homes by rising seas due to climate change. It's a handy term, but it's not entirely accurate, and that sits wrong with many.

"I think of refugees as being scattered and chaotic retreat. This is a resettlement, and we are careful to use that word," Patrick Forbes, the executive director of the Louisiana Office of Community Development, told Reuters.

"We consider ourselves lucky because we want to put our community together again," Chief Albert Paul Naquin, the tribe's official leader, said in The Guardian. "We know that nobody wants to leave, but it's about staying together."

As the waters around Isle de Jean Charles continue to rise, that is the overwhelming hope for its people: If they have to leave, they can go somewhere together. If the waters that once gave life eventually retake the town, the people can rise again.

"The island was a paradise, but what made the island a paradise was the people, the tribal community together as a whole, as one," Démé Naquin said. "We want to regain that closeness. Without coming together again, our unique tribal identity will be lost."

Now That's Interesting
When the people of Isle de Jean Charles leave the island, it will be the second time in their history that they will have been forced from their homeland — though for very different reasons. The first was in the 1830s, when President Andrew Jackson's Indian Removal Act moved large populations of Native Americans in the American South — tens of thousands of people — into Oklahoma, along the "Trail of Tears." Members of several tribes fled deep into Louisiana, and the Biloxi-Chitimacha-Choctaw band ended up on Isle de Jean Charles.