by Julia Layton Sep 20, 2016
This photo was taken on Dec. 10, 2014, during a weather bomb that hit the U.K. This wave was smashing into Blackpool, which is situated on England's northwest coast. Waves as high as 40 feet (12 meters) battered the U.K., which also faced serious winds... Jonathan Nicholson/NurPhoto via Getty Images

Scientists in Japan may have stumbled on a window to deep-Earth. In a study recently published in the journal Science, researchers traced a rare type of seismic activity detected in Japan in 2014 to a "weather bomb" on the other side of the planet. According to the authors, as the storm pounded the North Atlantic, it generated S-waves, a kind of faint Earth tremor never detected before, that registered in Japan.

The authors suggest weather bombs may help us map deep-Earth and better recognize activity preceding earthquakes. If true, this might be the first upside to the weather bomb.

In your typical extratropical cyclone, core pressure drops at a rate of maybe 10 millibars (mb) to 15 mb in 24 hours. When it drops at least 24 millibars in 24 hours, it's a weather bomb.

More precisely defined, a bomb is a "middle-latitude storm (low pressure system) that has a central pressure fall of at least 1 hPa (mb) per hour for a period of 24 hours," writes Dr. John Gyakum in an email.

Gyakum, professor of Synoptic and Dynamic Meteorology at McGill University in Quebec, co-authored, with Dr. Frederick Sanders at MIT, the 1980 paper that defined the meteorological "bomb."

The "explosive intensification of a surface low pressure system" is associated with an "explosive increase in surface winds, often to near, or above, hurricane force," Gyakum writes.

Weather bombs have produced some of the most destructive storms on record. In Ohio's 1978 "white hurricane," central pressure dropped 24 millibars in a stunning nine hours, leading to hurricane-force winds, temperatures of minus 100 F (minus 73 C) with wind chill, houses buried in snow and 51 dead. It was declared a Federal Disaster.

"Residents of Northeast Ohio went to bed ... with rain and fog," writes Dave Andersen on Cleveland.com, "only to wake up to the worst winter storm ever recorded in Ohio."

Gyakum refers to it as the "Cleveland Superbomb."

In coastal areas, he adds, there are also hurricane-level storm surges — temporary increases in sea level. The National Oceanic and Atmospheric Administration reported storm surges of up to 12 feet (3.7 meters) in the "Superstorm" of 1993, which wreaked havoc from Florida through the Northeast. The day before coming ashore, core pressure dropped 1 mb to 2 mb per hour. When the bomb crossed Florida's Gulf Coast, it produced the most devastating flooding on record for a Gulf of Mexico winter storm. It later produced 6-foot [1.8-meter] snowdrifts in Alabama and swallowed at least 18 houses along the Long Island coast.

In the 35 years since Sanders and Gyakum introduced the weather bomb, research has revealed more about the storms, "particularly with respect to a clustering of several of these dangerous low pressure systems in both time and space," Gyakum writes.

"These clusterings (or "cluster bombs") ... were associated with the unusually persistent stormy weather of the winters of 2013-14 and 2014-15 over the North Atlantic Ocean."

In January and February of 2014, at least 14 bombs went off in the North Atlantic. During a weather bomb in December of that year, Scotland recorded a 144 mph (232 kph) gust — in hurricane terms, high Category 4 winds.

The same month, a weather bomb between Greenland and Iceland triggered S-waves that registered in Japan.

As Thomas Sumner explains on Science News, powerful winds create massive ocean swells, and "when two opposing ocean swells collide, the meet-up can send a pressure pulse down to the ocean floor. The pulse thumps the seafloor, producing seismic waves that penetrate deep into the planet."

All storm waves generate seismic activity. So far, only the waves from a 2014 weather bomb off Greenland have been found to generate detectable S waves. Further research will reveal whether that's an upside.

Huge Solar Storms Could Have Kickstarted Life on Earth

Pee-resistant Paint: Coming to a Train Station Near You 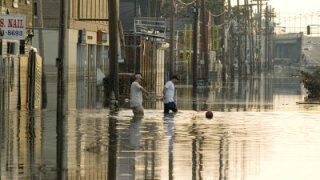 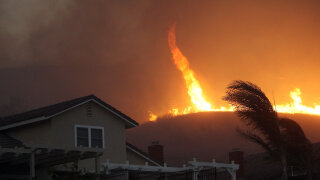