Why is winter not happening? 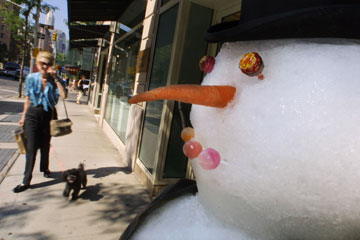 Residents of the midwestern and northeastern United States faced a brutal winter in 2010-2011. Highways skidded to an icy stop. Pipes froze. Stir-crazy families tested the watchable limits of their Netflix Unlimited Streaming accounts.

When meteorologists forecast another brutal winter for 2011-2012, a frost-tested U.S. public prepared for a full-blown snowman invasion. Even the 2012 Farmers' Almanac predicted "clime and punishment," complete with unseasonable chills and ice storms worthy of a George R.R. Martin novel [source: Weatherbee].

What happened? Where's the winter we were told to fear?

For starters, many regions of the Northern Hemisphere and some portions of the United States have experienced winter, if a slightly delayed one. A city in upstate New York is digging out from under a 32.5-inch (82.5-centimeter) snowfall as we write this in January 2012. Before the great snow though, residents of Fulton, N.Y., would probably tell you the winter had been meek. A seasonally rare snowstorm ripped through the Northeast around the middle of January. Parts of New Jersey reported up to 8 inches (20 centimeters) from said storm, according to CBS News.

Travel elsewhere on the globe and you'll also find a harder sell for your "year without winter" claims. As of Jan. 31, 2011, plummeting temperatures and heavy snows had killed 60 people across Eastern Europe [source: BBC].

Still, some parts of the United States feel a tad winterless in 2012 and, indeed, the season kicked off to a wimpy start. According to AccuWeather meteorologist Meghan Evans, the absence of atmospheric blocking patterns (along with the presence of La Niña and oscillation patterns) was partially to blame [source: National Weather Service].

The Floodgates of Winter 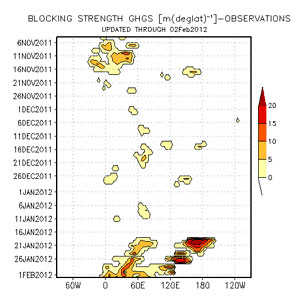 Witness 2011-2012's early lack of atmospheric blocking. Note how the atmospheric action starts to pick up at the end of January though.
Image courtesy National Weather Service Climate Prediction Center

Atmospheric blocking is essentially an atmospheric traffic jam. Key winds get involved in a sort of blustery chicken fight, and a high-pressure system gets stuck in one place for eight to 10 days, causing extreme weather (such as drought or flood conditions).

According to atmospheric scientist Tony Luop, atmospheric blocking occurs between 20 and 40 times each year globally. For example, blocking patterns over Greenland and northeastern Canada regularly send chilling blasts of air down toward the U.S [source: Evans]. Those chilling blasts are forced south because they have to detour around that pesky high-pressure system. Blocking patterns can be a normal aspect of wintertime atmospheric conditions, so when they didn't occur in late 2011, the floodgates of winter remained unpredictably closed.

But for how long?

The National Weather Service graph on this page shows a very visible increase in blocking patterns from mid-January on, which lines up with the winter weather hitting the Northeast as we write.

Think of this jet stream, or current of winds, as the snaking belt that holds up North America's warm-weather pants. These pants typically ride high during the summer (around the Canadian border) and low during the winter (dipping down through the southeastern United States). In winter 2011-2012, the jet stream belt has been too high, resulting in warmer-than-normal weather for parts of the United States, while also blasting Alaska and Europe with deep chills.

Meteorologists also blame Arctic oscillation (AO), a complex weather pattern involving atmospheric circulation over the Arctic. So far in 2012, the AO index has remained positive, helping to tighten that jet stream belt around the upper regions of the Northern Hemisphere [source: Mackrael].

Can we place the blame on climate change? Climate scientists will be the first to warn against pointing to any single weather event as proof of climate change. The atmosphere, after all, is a beast of an equation to work with. Climate change is a problem with multiple dimensions, but rising ocean temperatures and extreme weather are undoubtedly part of the equation [source: Gore].

For now, however, the winterless among us celebrate their "Januly" weather while residents of Alaska and Eastern Europe dream of warmer days.

What if I Were Struck by Lightning?
Inside the Weird Little World of Microclimates
As Earth's Climate Changes, Is It Time to Redefine the Four Seasons?