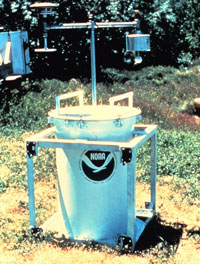 A photo of TOTO on an idyllic day without a cloud in sight.
NOAA/OAR/ERL/National Severe Storms Laboratory

­T­he United States holds nearly exclusive geographic rights to tornadic activity. An unusual weather phenomenon known as a dryline can be fou­nd running latitudinally east of the Rocky Mountains through the Central Plains. It accounts for the infamous Tornado Alley that stretches from Texas to North Dakota and shoots off east toward Ohio. This dryline separates dry air from moist air, and when the two types of air mix, thunderstorms form along this boundary. These storms can spawn the freakishly high number of tornadoes the U.S. experiences each year, much more than any other region in the world sees. Japan, for example, experiences an average of 20.5 tornadoes each year, while India gets 0.5 annually [source: Weather Doctor]. Central Europe sees about 10 per year, and Canada hosts an average of 80 twisters annually [source: Max Planck Institute, CBC]. The United States, by contrast, gets hit with around 1,200 tornadoes every year [source: Washington Post].

Armed with this data, it shouldn't be much of a surprise that American meteorologists came up with the idea of a weather-measuring device that could be placed in the path of a tornado. In 1979, National Oceanic and Atmospheric Administration (NOAA) researchers Dr. Alan Bedard and Carl Ramzy constructed the TOtable Tornado Observatory (which the pair dubbed TOTO after Dorothy's dog in "The Wizard of Oz"). Two years later, it would be the first man-made weather-sensing apparatus deliberately placed in the path of an oncoming tornado.

TOTO was a fairly primitive piece of equipment by today's standards. Bedard and Ramzy used a 55-gallon metal drum as the shell that housed the sensitive weather equipment sealed within. This equipment consisted of an anemometer (a device that measures wind speed with a spoked series of arms or cups perched atop a pole), thermometer, atmospheric pressure gauge and dew point sensor [source: NOAA]. The data collected from all of these instruments was recorded, which could be retrieved and analyzed later [source: Tornado Project].

Meteorologists compiled the data of the climactic conditions found around and inside tornadoes into computer models. These models could in turn be used to analyze supercell thunderstorms when they developed to determine if the conditions needed to produce tornadic activity were present. The information produced by TOTO could help meteorologists better understand tornadoes, enabling them to issue early warnings to the public and hopefully save lives.

All told, TOTO weighed 400 pounds (181 k) [source: PBS]. Such a bulky package required a customized pick-up truck to transport it. When ferried out to a site, TOTO could be rolled down a ramp and hoisted upright into place in about 30 seconds. Since TOTO predated global positioning satellite (GPS) navigation, the handlers had to use a compass to orient markings on the barrel toward true north to serve as a baseline for measurements. After that, TOTO was ready for action. All it needed was a tornado to measure.

­TOTO got its chance on a couple of occasions. But what works in theory doesn't always work in practice. Find out why TOTO didn't work in the field on the next page.