by Ed Grabianowski
Prev NEXT
5

The Eastern Canadian Blizzard of 1971 -- Quebec and Ontario, Canada 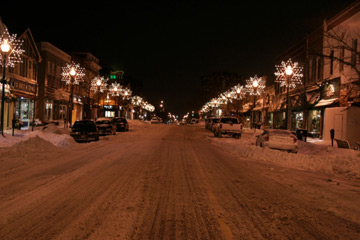 Although a blizzard blanketed Eastern Canada with snow in 1971, most Canadians weren't at all bothered by the storm.
Win Initiative/Getty Photos

This March nor'easter (a powerful storm that blows in from the Atlantic Ocean) created classic blizzard conditions throughout eastern Canada, dumping a foot and a half (45.7 cm) of snow on Montreal and more than two feet (61 cm) elsewhere in the region. On top of the snowfall, the storm produced heavy winds that whipped the snow into the air and obliterated visibility. These conditions, combined with frigid temperatures, resulted in more than 20 fatalities.

Although many Canadians took the wintry blast in stride -- residents of Cornwall, Ontario were encouraged to come to work despite the storm -- this blizzard caused a event virtually unheard of in Canadian history: the cancellation of a Montreal Canadiens hockey game [source: Envirozine]. It was the first time that a game at the Montreal Forum had been postponed since the flu epidemic of 1918 [source: LCN].