Are you safe from lightning if you haven't heard thunder for 30 minutes? 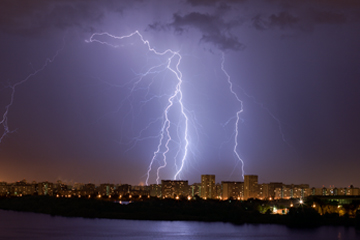 Turns out lightning is highly unpredictable, so trying to get its strike rate down to a science probably won't work in your favor.
Vasily Timatkov/Thinkstock

You know the old saying, "Where there's thunder, there's lightening." It means that if there's thunder around, you feel this wonderful sense of airiness and clarity. You know how it is: You hear a rumble in the clouds, and suddenly you find yourself struck by a swift surge of lucidity.

Wait. This happens all the time — we've confused our lightening and our lightning. When you hear thunder, you're not hit by a bolt of inspiration; you're hit by a bolt of electricity. And that bolt is estimated to contain anywhere from 15 million to 1 billion volts [source: Texas A&M, National Geographic]. The point being, where there's thunder, there's actually lightning — and lightning is not something you really want to hang out with.

But here's the fun thing about lightning: It's not exactly predictable, and there are a lot of myths out there about how to avoid it. For instance, don't think you're free from lightning on a clear day: A bolt can travel 25 miles (40 kilometers) from its cloud of origin, meaning that a distant storm can strike you down on a seemingly cloudless walk [source: Sohn]. (For that reason, it's a bad idea to assume that just because you can't see lightning, you're safe. If you're hearing thunder, period, you're at risk for an encounter with lightning.)

Your car is a decently safe place to pass a storm, but not because its rubber tires are protecting you. Instead, its metal frame will conduct currents to the ground if it's hit — that is, if you're not leaning against any metal, which will pass the voltage on to you.

But not every tale of lightning is false, and you should be happy to hear that if you haven't seen any lightning or heard any thunder for 30 minutes, you're generally safe to crawl out of your Faraday cage. In fact, meteorologists even have what is called the "30-30 rule." First, it says that if the time between the thunder and lightning is 30 seconds or less, you're at risk of being hit by a bolt. The last 30 is for the 30 minutes you need to wait after you see the last bolt of lighting or hear thunder. The National Weather Service even cites the rather sobering fact that half of all fatalities from lightning happen after the storm has passed [source: NWS].

So take shelter from a storm — and maybe even wait until that rainbow appears, just to be on the safe side.

Why are the auroras seasonal?
Are you safe from lightning if the skies are clear?
Is humid air heavier than dry air?