Are you safe from lightning if the storm hasn't hit yet? 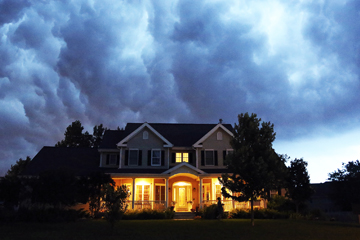 Clear skies aren't a good indicator when it comes to storm safety. Take cover if you hear thunder, just in case.
driftlessstudio/Thinkstock

It almost sounds like a philosophical question: Are we safe from lightning before the storm? There's something a bit poetic to pondering whether we can be struck by something we haven't yet observed, but for which we have a premonition. It's right up there with asking whether a falling tree makes a sound if no one's around to hear it.

Or something like that. The truth is that although we often talk about storms and lightning using veiled, romantic language, we can forget that we're talking about serious threats. While an average of only 267 lightning injuries are reported each year (leaving you with an estimated one in 960,000 chance of getting struck in any given year), it's seriously bad news if you are hit by a bolt [source: NWS]. Cardiac arrest could occur on the spot, and neurological damage might affect you long-term [source: Cooper]. This all adds up to one big point: Don't hang around anywhere that lightning could strike. A good life rule: avoid bolts of electricity flying at you, period.

In short, the answer to our question is no, you're not safe from lighting even if the storm is approaching but not yet present. Do not go running around in almost-but-not-quite thunderstorms just because you're not currently getting soaked to the bone. The bone-soaking will come, and even if it doesn't, that doesn't mean squat in terms of lightning safety.

Consider that lightning has been known to strike from as far as 25 miles (40 kilometers) away from its cloud of origin. That means that if a storm is nearly 30 miles (48 kilometers) away, it can still produce a lightning strike at your feet. And also, keep in mind that lightning often travels through ground current, so even if it isn't a direct hit, you're still at risk for injury [source: Sohn].

So let's just go over some things to remember about lightning safety. If you can see lightning — anywhere — you're not safe from it, no matter how distant it looks. (You just can't judge where it'll end up striking, or how quickly it's moving.) Even if you can't see lightning, you're still not in the clear. If you're hearing thunder, you need to assume that lightning is close enough for you to be struck. Find shelter and take cover in either circumstance.

And here's some even more disturbing news: As we said, lightning can strike from clouds miles away. This means you can be under a clear blue sky and still get hit by lightning [source: FSU]. But fear not: Just because something is possible doesn't mean it's likely. While it's important to be safe near storms, there's also no need to panic.