Browse the article How far in advance should I check the weather forecast? 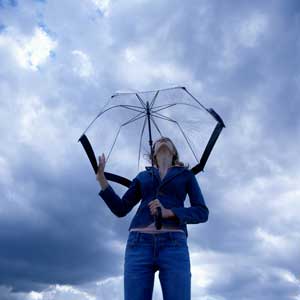 Our planet's atmosphere can prove quite unpredictable, even with modern forecasts.
Dougal Waters/Digital Vision/­Getty Images

­If you're a control freak, there's nothing more frustrating than those little bits of uncertainty that worm their way into your best-laid plans. After all, you're not organizing all these endless events for your health -- you have dinner parties to sweat through, vacations time to maximize and weddings to faintly recall through a Xanax haze.

Like it or not, life swims with uncertainty -- and few factors epitomize this as much as the weather. If you're planning an outdoor event, going for a bike ride or even just looking to tackle a little yard work, it's a roll of the dice as to whether you'll enjoy clear and sunny skies or endure torrential rain.

Of course, today's heavy planners have a very useful tool at their disposal: the weather forecast. All you have to do is tune to the right channel or visit any number of weather and news Web sites and you're all set. In this day and age, you're never more than a few keystrokes away from a local three- or even 10-day forecast.

­Yet the unflinching smiles of TV meteorologists often seem more like the grins of jackals a week later, when you wind up camping in the rain or oiling up for a sunless beach trip. Regardless, we always crawl back to the weather forecast and begrudgingly take note of their predictions for the weekend ahead. They're not always right, but what are you going to do about it? Like the building contractor who always finishes late and over budget, he's the one who knows how to build a house -- not you.

Just how far can we trust Al Roker and the like? How far in advance can you check the weather and expect the forecast to hold true? 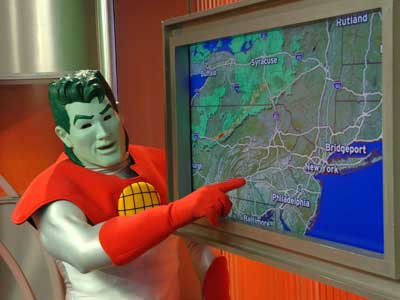 Yes, not even Captain Planet has a good handle on what the weather will bring. Ultimately, all meteorology can do is calculate, speculate and guess.
WireImage/WireImage/­Getty Images

­You can blame your local weather forecast all you want, write angry letters to meteorologists and even take matters into your own hand with a little homespun meteorology. In the end, however, the fault lies not with your local weather anchor, but with the rich complexity behind every breeze, cloud or sprinkle that takes place in Earth's atmosphere.

It's easy to get lost staring at the swirling currents in a Jacuzzi -- and not just if you've been in there for 30 minutes. If left unused and empty, you have nothing but a tub full of hot water. But what happens when you turn on the jets or adjust the thermostat? What happens when, a few margaritas to the wind, you and your friends finally tumble in for a dip?

The Jacuzzi jets churn the waters to life, the rise in temperature creates more steam and the bevy of bodies force new currents in the chlorine-rich water. Various competing and random causes create an entire system of effects. Now imagine a Jacuzzi filled with roughly 5.5-quadrillion-tons (4.99-quadrillion-metric-tons) of gas and stirred to life by such factors as gravity, solar radiation, terrestrial radiation, temperature, pressure, topography and human civilization. You're lounging in Earth's atmosphere, a vast, gaseous body so complicated that even our most powerful computers can't always anticipate it more than a few moves into the future.

The unruly atmosphere, however, does adhere to definite physical laws and follows established patterns, which we call climate. Meteorologists predict the weather by examining past patterns and comparing them to observable atmospheric phenomena to create a model of the future. In this respect, it's like owning a pet. You know how Fido normally behaves given various conditions. As such, you can gauge current or upcoming conditions and make a decent guess as to how he'll behave.

The weather, however, is far more complicated and temperamental. 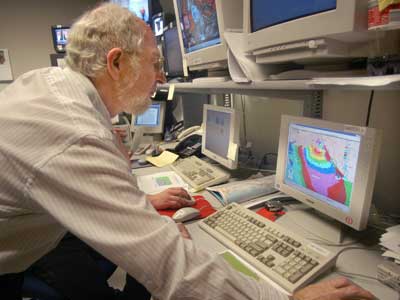 A meteorologist for the National Hurricane Center (NHC) runs a storm surge computer model on a portion of the Louisiana coast in October 2002.
AP Photo/Andy Newman

­In anticipating tomorrow's weather today, the simplest tool at a meteorologist's disposal is persistence forecasting. It may sound ridiculous in an age of Doppler radar, but this method essentially breaks down to, "Whatever the weather is doing today, it will continue to do tomorrow." This method isn't perfect, but it serves as a dependable groundwork for forecasting.

With this technology, we can build a model of what tomorrow's weather may look like. Yet the sheer number of variables renders even a short-term prediction fallible. One tiny miscalculation and the whole model can change drastically -- a fact you may know as the butterfly effect. When you look an additional day into the future, the model becomes even more uncertain. This is because each subsequent weather model is generated from the preceding weather model.

Meteorology technology continues to improve, but for the foreseeable future, the weather forecast will be more accurate the closer you are to the day in question. The 24-hour forecast is more dependable than the three-day forecast, which is in turn more dependable than the 10-day forecast. However, don't be afraid to employ a little persistence forecasting yourself. If your area typically experiences heavy rains in April, then guess what month you shouldn't schedule the next church picnic for?

Explore the links on the next page to learn even more about the weather.