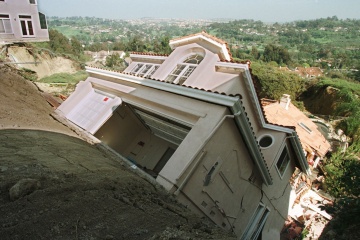 A home in southern California slipped down a hillside in 1997 thanks to heavy rains generated by El Nino.
Vince Bucci/AFP/Getty Images

It was the winter of 1997-1998, and the world's weather seemed to be on a steroid-infused, bipolar rampage. In southern California, record rainfall saturated the ground and caused rivers to swell beyond their capacities. Floodwaters inundated low-lying areas, damaging property and blocking busy freeways. People living on higher ground weren't safe, either. Drenched hillsides suddenly liquefied, sending rivers of mud and debris churning into unlucky neighborhoods. As if that weren't enough, powerful storms whipped the Pacific Ocean into a foamy green frenzy, walloping the coast with massive waves that eroded the foundations of seaside homes and sent them crashing into the water below.

Across the Pacific Ocean in Indonesia, people struggled with the opposite problem: There wasn't enough rain. Drought turned the forests into a tinderbox, and dozens of wildfires ultimately scorched an area larger than the state of Indiana. To make things worse, thick smoke from the blazes drifted across the region, causing health problems, decreasing tourism, and triggering airport delays across Indonesia, Malaysia, Singapore and even the distant island nation of Maldives. In some areas of Indonesia, for instance, drivers were forced to turn on their headlights as dense smoke turned midday into a dusky shade of brown.

While the havoc wreaked in these two places couldn't have been any more different, both weather events resulted from the same climate phenomenon: El Nino. That's when unusually warm waters along the equator in the central and east-central Pacific Ocean interact with the atmosphere to alter weather patterns across the globe. Yep, one little part of the ocean warms up a dozen degrees, and all of a sudden California is soaked and Indonesia is bone-dry. And that's just the beginning: Tornadoes in Florida, cyclones in Madagascar, record heat in Mongolia and myriad other unusual weather have all been linked to El Nino weather patterns [source: Suplee].

Clearly, El Nino is a big deal given all the crazy weather it causes. But all that flooding, fire, heat, drought, and storminess can also have a big impact on really important systems like food production, water supply and human health. In some cases El Nino weather can actually be a matter of life and death. Yikes! It's no wonder television weather forecasters can't stop talking about it.