What Is El Nino? 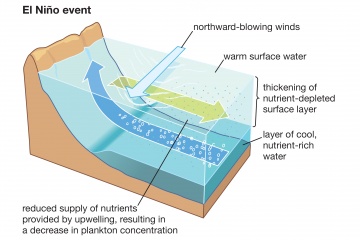 A look at how El Nino sets itself apart from all that regular weather stuff.
Encyclopaedia Britannica/UIG Via Getty Images

Although El Nino's effects can be felt across the globe, it all starts in the Pacific Ocean, right along the equator. Under normal conditions, a persistent breeze known as a trade wind blows westward across the ocean, pushing warm surface water off the coast of South America to Southeast Asia. This allows colder water to rise in the eastern Pacific in a process known as upwelling. As a result, the surface water off the coast of Peru is about 14 degrees Fahrenheit (8 degrees Celsius) colder than the surface water surrounding Indonesia [source: TAO]. Heavy rain falls over the warm waters of the western Pacific, while the east stays cool and dry.

Every two to seven years, however, El Nino makes an appearance. It begins when — for reasons scientists don't fully understand — the trade wind begins to weaken. With nothing pushing the warm surface waters westward, they shift east along the equator and bring the rains along for the ride. That makes for wet conditions and low surface pressure in the central and eastern Pacific, while the western Pacific is unusually dry under high pressure [source: Live Science].

Scientists start thinking El Nino when water in the tropical eastern Pacific is 0.9 degrees Fahrenheit (0.5 degrees Celsius) warmer than normal and the wind, surface pressure and rain are consistent with the event in the ways mentioned above. If this happens for five overlapping three-month periods (Jan.-Feb.-Mar., Feb.-Mar.-Apr., Mar.-Apr.-May, etc.), then it's officially an El Nino [source: NOAA].

Often, but not always, El Nino is followed by its sister phenomenon, La Nina. That's when the trade wind picks back up and actually gets stronger than normal, pushing the warm surface water and rain far into the western Pacific. Upwelling resumes, restoring colder water and cool, dry weather to the central and eastern Pacific [source: NOAA].

Both El Nino and La Niña typically last nine to 12 months, develop in the spring, peak in late autumn or winter, and weaken during the spring or early summer. Scientists describe the return to normal conditions between these events as a neutral phase. Together, these three events — El Nino (the warm phase), La Niña (the cool phase) and the neutral phase — make up what is known as the El Nino-Southern Oscillation [source: NOAA].

What's with the name?

Literally, "el nino" translates to "the little boy" in Spanish, but when capitalized it means "Christ Child." Peru's Spanish colonizers coined the term after discovering that the waters off the country's coast sometimes turned unusually warm right around Christmastime. It was a phenomenon that the indigenous fishermen had known about for centuries, but it was the Spanish term that stuck [source: Evers].