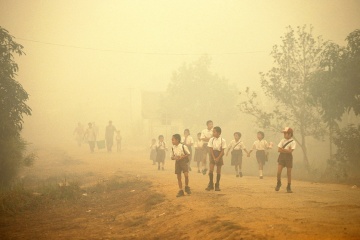 In 1997, Indonesian children walked through smoke as wildfires brought on by El Nino raged across the country.
Thierry Falise/LightRocket via Getty Images

In 1982, El Nino wasn't the household word that it is today. Even some meteorologists had never heard of the term. So when an El Nino sent temperatures in the cool eastern Pacific to unusually high levels, scientists initially blamed the event on the recent eruption of Mexico's El Chichon volcano. By spring 1983 the water temperature had begun to return to normal and meteorologists decided it wasn't the volcano after all [source: Williams]. One thing was clear, though: This was the worst El Nino in at least a century if not longer. Drought dominated Australia, Africa and Indonesia, while some areas of Peru that normally received just 6 inches of rain (15 centimeters) were doused with 11 feet (3 meters)! In the end the climate event was blamed for $8 billion in damage and between 1,300 and 2,000 deaths [source: Gannon].

Yet another strong El Nino took hold during the winter of 2015-2016. By February, ocean temperatures along the equator in the eastern Pacific had been at or above record-high readings for several months, meaning it was probably even stronger than the 1982 or 1997 events. Still, those earlier El Ninos brought way more rain to southern California than anything the region saw in 2015 or early 2016. For reasons that aren't yet clear, this massive El Nino just didn't change the jet stream in the same way it had in the past. Instead, northern California and the Pacific Northwest caught the brunt of the precipitation [source: Swain].

Written records of El Nino's effects date back to 1525, and there's evidence that the phenomenon is even older than that. Much older. Geologic records such as ice cores and deep sea mud suggest that El Ninos were wreaking havoc on Earth's weather patterns at least 13,000 years ago [source: Suplee]. A Harvard scientist even dated it back 124,000 years by examining the composition of annual deposits on Indonesian coral [source: Cromie].