El Nino in the Future 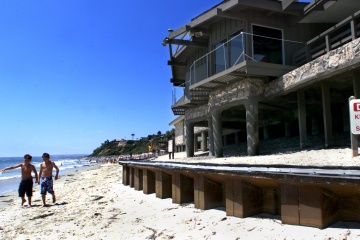 At one time the sand in front of the Marine Safety building on California's San Clemente beach was level with the building. The erosion began with the El Nino weather of 1983, and has become gradually worse since then.
Mark Boster/Los Angeles Times via Getty Images

People are always better prepared for weather events when they have some type of warning. Take tornado forecasting, for example. Major improvements over the past 10 or 20 years have saved countless lives because people know when to take cover. The same is true for El Nino: If meteorologists can warn people ahead of time, they can try to prepare for the crazy weather that follows.

Forecasting has come a long way since the El Nino of 1982-1983. That event caught scientists completely off guard and pushed them to install 70 buoys in the southern Pacific Ocean from the Galapagos Islands to Australia [sources: Williams, National Geographic]. These buoys, along with instruments carried by satellites and weather balloons, collect vast amounts of weather data from the oceans and atmosphere. Scientists process this information using complex computer models, which can often forecast an El Nino several months to a year ahead of time [source: NOAA].

The first time scientists were able to forecast El Niño was a few months prior to the 1997-1998 event. That allowed Peruvian farmers to plan ahead so they could graze cattle and grow crops in areas that were normally too dry. Fisherman gave up on the usual anchovy harvest to trap cold-water-loving shrimp instead. Government officials built storm drains and stockpiled emergency supplies, potentially saving lives thanks to the scientists' heads up [source: Suplee].

Of course, now the big question is: How will climate change affect El Nino? And the answer to that question is: Yes. Confused? Well, so are scientists. See, none of them really know how climate change will affect El Nino, but all know that it will. The best guess right now is that climate change will affect how heavy El Nino's impacts are, lessening or intensifying them based what the weather is like in a warmer climate. For example, Indonesia, which dries up and catches fire during El Nino, is also expected to get wetter as a result of climate change. So during El Nino it might still be dry, just not as dry. And while that sounds like good news, it works the other way, too: Areas that dry out during El Nino are in big trouble if they're also expected to be drier as a result of climate change [source: Di Liberto].

Often when I write these articles, I wish I had studied that particular topic in college, and this article is no exception. El Nino, it turns out, is a really interesting phenomenon. The idea that a small change in ocean temperature over one little part of the ocean can cause big changes in the world's weather is a truly incredible notion. Thankfully, there are people who did study this stuff in college, and we can look to them to explain this big, fascinating system of air and water, wind and currents, temperature and velocity that makes our climate function.