Lightning Deaths in the US Are Way, Way Down

by Patrick J. Kiger Sep 20, 2017
Lightning deaths in the United States have dropped significantly since the 1940s; that trend's driven by a number of factors. Rakesh Bakshi/AFP/Getty Images

Across the United States, lightning has killed 15 people so far in 2017, according to National Weather Service data. While those deaths are tragic, that's fewer than half the 38 lightning deaths that the nation had in 2016 — and we're on track to have the lowest number of recorded lightning fatalities since 1940, the earliest year for which the federal government has data. (The government maintains a year-by-year breakdown of deaths from lightning and other weather threats during that period.)

If you look at those historical numbers, though, what's most startling is the long-term decrease in lightning deaths over that period. In 1943, the most lethal year on record, 432 people were killed by lightning, and throughout the 1940s, an average of 329.3 people died each year. But in the 1950s and 1960s, the rate started dropping dramatically, and steadily kept decreasing to the point where over the 2010s, the average annual fatality rate is about a tenth of what it was during the 1940s.

So why are so many fewer people being killed by lightning these days than in the past? One major reason is urbanization. In 1940, according to the U.S. Census Bureau, 43.5 percent of the nation's population lived in rural areas. By 2010, that number was down to 19.3 percent, with more than 80 percent of the population living in cities. And today, according to the U.S. Environmental Protection Agency, the average American spends 90 percent of his or her time indoors — which generally is the safest place to be during a lightning storm. (But that doesn't mean that you can't be injured or killed by lightning inside a house. This U.S. Centers for Disease Control and Prevention primer on lightning safety gives some basic precautions you should take indoors during a storm.)

And seven decades ago, not only were there more people in rural areas, but they also spent more of their time working outdoors, where they were more vulnerable to lightning. As Ronald Holle, a meteorologist who studies lightning deaths, explained in The Atlantic in 2014, farmers in the 1940s still used teams of horses to pull their plows, and it took them all day to finish tilling a 20-acre field. Modern farmers, in contrast, are more likely to be sitting inside a fully enclosed tractor with a metal housing that offers lightning protection.

When people are killed by lightning these days, it often happens when they're enjoying some outdoor leisure activity. That's according to a 2017 analysis of lightning deaths over the past decade by John S. Jensenius, Jr., a lightning safety specialist with the National Weather Service. Jensenius found that of the 352 deaths over the past decade, 33 people died while fishing, while 20 were on the beach, 18 were camping and 16 were boating. When it came to sports, soccer players accounted for 12 deaths, while golfers accounted for nine — a piece of information that shows a golf course isn't necessarily the most dangerous place during a storm. Farming and ranching, in contrast, accounted for just 17 of the recent lightning deaths.

Over the past century, the United States has become significantly urbanized, and now most of the population spends the majority of its time indoors, reducing lightning-strike risks.
Grant Faint/Getty Images
Now That's Interesting
According to Jensenius' research, men comprise 79 percent of the people killed by lightning. 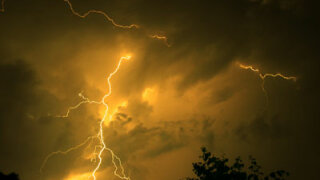 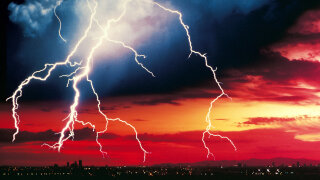 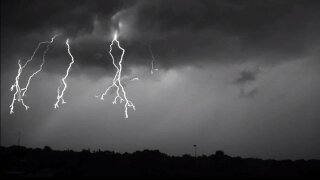 You Haven't Seen Lightning Until You've Seen This Slow-motion Lightning