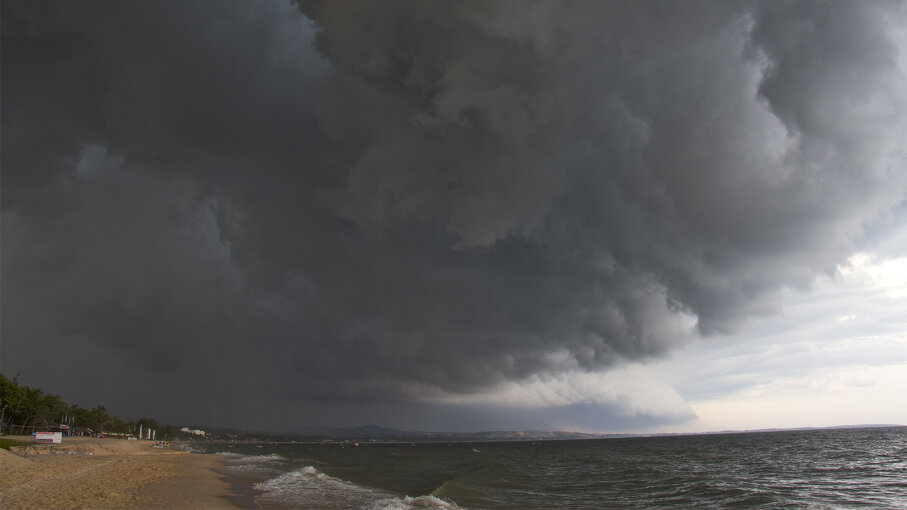 A monsoon cloud hovers over the coast of Vietnam in 2011. Wikimedia Commons (CC By-SA 3.0)

In the summer of 2019, four states in India were pounded by heavy rains that caused severe flooding and landslides, killing at least 244 people and forcing 1.2 million others to flee their homes and take refuge elsewhere, mostly in government-run relief camps, according to Agence France-Presse.

But the disaster wasn't some freak storm. Instead, it was the result of the annual monsoon, a reoccurring phenomenon in various parts of the tropics, the warm middle section of the globe between the Tropic of Cancer and the Tropic of Capricorn. In a monsoon, the prevailing, or strongest, winds in a region change direction, bringing moist air with them, which causes heavy precipitation. As the U.K.'s Met Office explains, the word "monsoon" comes from the Arabic word mausim, meaning season, which is fitting because monsoons last for months at a time. And though they aren't storms themselves, they can cause very powerful ones, such as the deluge that India experienced.

"In the tropics, we don't have summer or winter and spring," explains Jenni Evans, a native of Australia who is now a professor of meteorology and atmospheric science at Pennsylvania State University, and also serves as director of the school's Institute for CyberScience, in an email. "We have wet and dry. It's basically broken up into wet season and the dry seasons. The monsoon means the wet season."

When Do Most Monsoons Occur?

Monsoons typically are active between May and November in the Northern Hemisphere, which is when three of the world's major monsoons — the African, East Asian and Indian ones — occur, as well as the smaller-scale, less intense North American Monsoon, which affects the southwestern U.S. and northwestern Mexico. Monsoons occur between November and March in the Southern Hemisphere, where the Australian monsoon is the only big one.

As Evans says, monsoons are caused by the sun heating up the land and the air over it during the warmest half of the year, so that they become warmer than the ocean and the air above the water. Cold air is more dense, so it pushes warm air out of the way and changes the wind direction, blowing onto the land. The monsoon "is on the scale of a continent," Evans explains. "It's huge. If you look at the high and low pressure systems that come across North America and affect our weather, it's that big."

That scale means that the monsoon is affected by Earth's rotation, so that in the Northern Hemisphere, the low-pressure system that it creates spins counter-clockwise, Evans says. (In the Southern Hemisphere, it spins in the opposite direction.)

The most prominent — and at times, potentially catastrophic — characteristic of monsoons is that they cause rainfall. A lot of it. In fact, according to NASA, India gets between 50 and 75 percent of its annual rainfall from the monsoon.

"And so all of that ocean air carries all that moisture on shore," she continues. That air is spinning and rising, and when it gets to a higher altitude and cooler temperature, the water vapor condenses and forms clouds. "You get so much moisture there, that you make big heavy raindrops and they fall."

Additionally, some of the water vapor forms snow and ice in the clouds, which can sometimes result in hailstorms. Mostly, though, what a monsoon produces is thunderstorms and accompanying rain, she says.

The normal pattern of the monsoon can be influenced by the Madden-Julian Oscillation, a shorter-term fluctuation of atmospheric pressure that can add moisture to the monsoon at some points and take it away at other times, causing either wet or dry spells during the season.

The Indian monsoon behaves a bit differently from the monsoons that occur elsewhere in the world because of the subcontinent's topography.

Monsoons eventually ease toward the end of their cycle, as the seasonal temperature shifts and the land starts to cool down, creating less of a contrast with the water. "What that means is that the ocean is relatively warmer compared to the land," Evans says. "So, the air isn't flying over the land as much, and you don't get that rotation and all that moist air. So, the monsoon kind of dies off."

Though monsoons sometimes can lead to punishing storms, they also have an important beneficial effect. Farmers in India, for example, rely upon the monsoon to provide rainfall to nurture crops, and the nation also relies on the water from them to fill reservoirs that are harnessed to produce hydroelectric power, as this article from the UCAR Center for Science Education details. In years when the monsoon doesn't produce as much rainfall, crop yields can decrease and hurt the Indian economy.