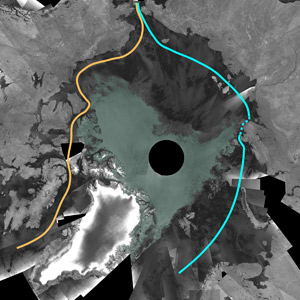 A mosaic of images from 2007 shows that the Northwest Passage (represented in orange) is open. The Northeast Passage (in blue) didn't thaw completely in 2007. The dark gray areas are ice-free, while green represents areas with sea ice.
Photo courtesy ESA

Control of an international trade route is a valuable right. To build and manage the Panama Canal, the United States supported a revolution and spent more on a construction project than it ever had before. To open up the Suez Canal, the Egyptian government leased its land to a private French company and enslaved its own people.

So it's no surprise that after the European Space Agency's announcement, countries with Arctic borders started scrambling for control of the route. Canada immediately claimed rights to regulate and bar transit in the passage. Due to the route's path through Canada's Arctic Islands, the country's Prime Minister even went so far as to ask that all large ships entering the passage first register with the Canadian Coast Guard [source: BBC News].­

Yet such claims are contested by Russia, Norway, the United States and Denmark, all of which feel they have a stake in the route's regulation. Control over the melted waters promises much more than shipping rights -- it could also include access to formally unreachable oil and gas deposits. For now, the five nations with Arctic borders have agreed to resolve their territorial disputes diplomatically and abide by the existing laws and treaties.

Indigenous peoples have also felt the lure -- or threat -- of an operable international passage. While some are interested in the possibility of a booming economic enterprise, others feel that their traditions and way of life will be compromised by the industry and its ecological effects [source: New York Times]. But while indigenous peoples, locals and environmentalists may have fears that hosting an international shipping industry in the delicate Arctic will only exacerbate the area's environmental problems, it's likely governments and businesses will press ahead to commercialize the route. The Canadian government even explained its bold claim of the passage as an act of environmental stewardship since it plans to regulate shipping [source: BBC News].­

­Of course, if the sea ice continues to melt at its current pace, arguments over the passage's control will be irrelevant -- ships will be able to simply cross the pole through open waters. And it's unlikely that regular commercial shipping will take off any time soon. Despite the Arctic's rapid thaw, it's still frozen through the winter, making the passage's navigability seasonal. It's also icy, difficult and dangerous -- ships would need to be constructed or fortified to withstand the ice, as well as heavily insured to make the passage safely. There are no ports for refueling or restocking the ships, and there are a limited number of Arctic pilots with the know-how to navigate the route.

­But it's certain that the opening of such a handy short-cut won't be brushed aside. Areas of the Arctic that were long-impenetrable to explorers -- let alone traders -- will likely be the backdrop to colossal post-panamax freighters loaded with cars, clothes and food.

The Northeast Passage, a route that winds along Asia's Arctic coast, thawed for the second time in 2008, making it the first year both passages were open simultaneously. With the two waterways clear, a vessel could circumnavigate the North Pole -- something that has been impossible for at least 125,000 years [source: The Independent].