Frog Rain Causes: The Flight of the Amphibians 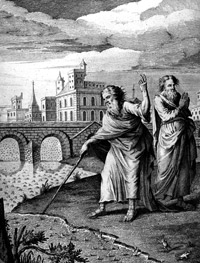 The plague of frogs mentioned in Exodus be­gan in Egypt.
Hulton Archive/Getty Images

­­­­It's hard to get a good mental picture of frog­ inundation that doesn't have Moses standing off in the distance. The biblical image of a slimy, surprising mass is tough to avoid. However, there's act­ually a pretty simple explanation for the whole thing: It involves whirlwinds and low-weight creatures­.

­­­­Frogs can weigh as little as a few ounces. But even the heavier ones are no match for a watery tornado, or a waterspout, as it's called when a whirlwind picks up water. The series of events that can lead to frog rain go something like this:

­­­A small tornado forms over a body of water. This type of tornado is called a waterspout, and it's usually sparked by the high-pressure system preceding a severe thunderstorm.­

As with a land-based tornado, the center of the waterspout is a low-pressure tunnel within a high-pressure cone. This is why it picks up the relatively low-weight items in its path -- cows,­ trailer homes and cars get sucked up into the vacuum of the vortex. But since a waterspout is over water and not land, it's not automobiles that end up caught in its swirling winds: it's water and sea creatures. ­

The waterspout sucks up the lower-weight items in the body of water as it m­oves across it. Frogs are fairly lightweight. They end up in the vortex, which continues to move across the water with the high-pressure storm clouds. When a particularly powerful storm hits land, the waterspout might go with it.

When the storm hits land, it loses some of its energy and slows down. The pressure drops. Eventually, the clouds release the water they're carrying. As the rain falls, the vortex eventually loses all the pressure that's keeping it going, and it releases whatever it has picked up in its travels. Sometimes, this cargo includes frogs.

­The end result is frog rain. Sometimes it's a few dozen frogs -- or a couple hundred or even thousands. And usually, it's not just frogs. Frogs get top billing because of their role in Exodus, but waterspouts can carry all sorts of items. So what's the strangest thing that can fall from the sky? Find out next.