Where did the idea of a 2012 apocalypse come from? 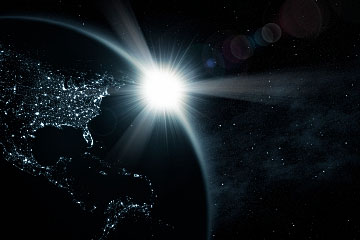 Where did the the 2012 doomsday predictions come from?
©iStockphoto.com/BeholdingEye

You've probably heard it from someone before -- the end is near. Maybe you've seen pictures of people holding up signs that warn of impending doom, or maybe your colleagues at work have jokingly (or nervously) debated the possibilities of an apocalypse arriving in the year 2012.

It seems like almost everyone is at least aware of some kind of an end-of-the-world scenario, and popular culture is rife with 2012 references. Movies like "Apocalypto" and "2012" get people talking and worried, and Internet searches reveal scores of obsessive conspiracy theorists maintaining entire Web sites dedicated to understanding or surviving an apocalypse. But where did such an idea come from?

Doomsday predictions are nothing new -- think Nostradamus or the Y2K phenomenon -- but the idea of a 2012 apocalypse is curious for the large number of differing theories that seem to build off one another. It's possible to trace the conspiracy, however, back to an author named Zecharia Sitchin, who wrote often about the ancient Sumerian civilization. In several of his books, he claimed to have translated Sumerian texts that mention a mysterious planet called Nibiru. According to Sitchin, Nibiru travels an extremely elliptical orbit around the sun and carries an ancient civilization of aliens known as the Anunnaki.

These theories originated in Sitchin's 1976 book, "The Twelfth Planet," but it wasn't until later that Nancy Lieder, founder of the Web site ZetaTalk, expanded on the concept of Nibiru. Lieder, a self-described psychic who claims to have communicated with aliens, wrote that Earth was in danger of colliding with the planet Nibiru, which she also referred to as Planet X. The original doomsday date, according to Lieder, was supposed to have happened around May 2003. But when the end of the world did not come, she eventually shifted the apocalypse to coincide with the end of the Mayan Long Count calendar -- Dec. 21, 2012, which is also the beginning of the winter solstice.

Countless conspiracy theorists have taken this information or something like it and embellished on the myths, finding ways to connect it to any number of phenomenon, including solar activity, geomagnetic reversal and planetary alignment. Several texts and other cultural innovations, such as the Mayan calendar, the writings of Nostradamus, the I Ching and Biblical revelations, tend to show up in connection with apocalyptic predictions, but usually in wildly distorted fashion.

Most astronomers and scientists dismiss the idea of a 2012 apocalypse as a hoax -- let's hope they're right. Right? For lots more information on the end of days and other topics, see the links below.

Inside the Weird Little World of Microclimates
Do We Need a Category 6 for Hurricanes?
10 Myths About Rainbows