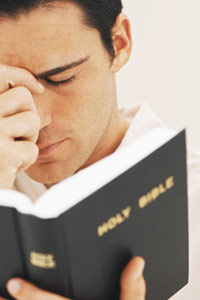 Is there cause for alarm? The Bible is open to interpretation, and some of its readers believe it foretells a near-future end of the world.
Stockbyte/Thinkstock

The Bible, in a move worthy of a secretive government agency, neither confirms nor denies that 2012 will usher in the end of the world. The scriptures certainly contain passages that prophesy the end, but whether they are true predictions of a physical cataclysm or literary devices used for emphasis is anybody's guess. Plenty of preachers have claimed the prophecies are literal, but so far, all interpretations of the Bible that predicted of the world ending on a specific date have proven inaccurate.

Speculation about 2012 as the date of the end started with study and interpretation of the Mayan calendar. The complex Mayan civilization flourished in Mexico and Guatemala beginning around A.D. 250. Experts are still uncertain why their civilization suddenly collapsed around 900. The Mayans were accomplished mathematicians and astronomers, and they devised a calendar that divided time into cycles called baktuns. The final cycle was to end on the winter solstice, December 21, 2012 [source: History.com].

Some think this abrupt end to the calendar hints at the end of the world. Other interpreters foresee an occasion of spiritual rebirth. Current Mayan shamans reportedly view the occasion not as an approaching calamity but as the beginning of a new age [source: Keim].

The buzz about 2012 has been fueled by additional sources as well. Devotees of sixteenth-century French apothecary and visionary Nostradamus claim that his prophecies point to the year 2012 as an end of days. Other people assert that the alignment of the sun with the center of the Milky Way Galaxy in 2012 seems ominous..

Many religions include prophesies about an end to mankind, and some Christian preachers and Bible readers believe 2012 is indeed the end of the world as set forth in the scripture.

Biblical Prediction of the World's End

A number of Protestant sects have focused on the imminent second coming of Jesus as a key part of their doctrine. In the 19th century, groups known as dispensationalists put forth the theory that Christ's arrival would be preceded by a "tribulation." Wars, famines, epidemics and earthquakes would be the fate of anyone not transported away in the "rapture" that would come just before the havoc. These predictions drew on verses from the Book of Revelation, the Old Testament and other biblical sources [source: Luo].

The tribulation and the second coming have always remained just around the corner, but some Evangelical preachers have suggested that 2012 may be the time when they finally arrive. Others have drawn on the methods put forth in the best-selling 1997 book "The Bible Code" to determine that news of 2012 is contained in the scriptures in the form of a cipher [source: Parkview Baptist Church].

There is a long history of predicting the exact date of the apocalypse based on biblical interpretation. In the 1840s, upstate New York farmer William Miller kicked off an end-of-the-world movement by calculating that the final day would arrive on October 22, 1844. Thousands of people prepared for the end, only to experience "The Great Disappointment" on October 23. The Seventh Day Adventist Church is an offshoot of Miller's movement [source: White].

The Jehovah's Witnesses, founded in the 1870s, adopted a belief that the end would come in 1914. An Adventist prophet declared that February 6, 1925, would be the date. Evangelist Hal Lindsey's 1970 bestseller "The Late, Great Planet Earth" saw the end coming before 1988. Television and radio preacher Harold Camping predicted the curtain would drop May 21, 2011. He gave a revised version of the prophesy a few days later [source: Daily Record].

In the next section, we'll look at the mainstream view of the 2012 predictions.

For as long as there have been predictions of the end, there have been those who scoff and the prophets. The question remains: Who will laugh last? As a character in the movie "2012" says, "Kind of galling when you realize that nutbags with cardboard signs had it right the whole time." Someone's got to be right, but that doesn't mean people will ever agree.

The Mainstream View of 2012 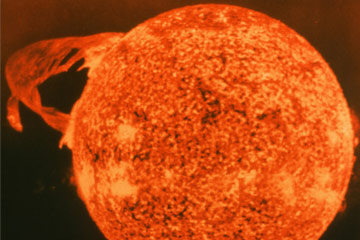 Some scientists believe that concentrated solar activity in 2012 will have disastrous repercussions on Earth.
Goodshot/Thinkstock

Most established Christian churches reject the idea that anyone can predict the apocalypse, whether in 2012 or on any other date. They see the apocalyptic imagery of the Bible as symbolic rather than literal. In many cases, the language and prophecies of the scriptures relate to events happening at the time those passages were penned. The period during which the scriptures were written was, like our own time, fraught with ominous political and religious upheaval.

The Roman Catholic Church does not accept 2012 as the end. As Bishop and theologian Kenneth E. Untener put it in an article about the millennial controversies, "apocalyptic language is symbolic and cannot be plumbed for secret clues that simply aren't there."

Some Christians are critical of all end-time predictions. Rapture theology, they assert, devalues a respect for and reverence toward nature. Believing they have only a short time left on Earth, followers of rapture theology tend to regard God's creation as disposable. The doctrine may generate an escapist attitude in believers, who focus intently on an end that may never come [source: Roberts].

The evolutionary biologist and noted atheist Richard Dawkins dismisses the notion of a predictable end arriving in 2012 as nonsense and labels believers in a biblical apocalypse "gullible idiots." Science, he says, suggests only that humans may someday become extinct, "the fate of almost all species that have ever lived" [source: Quinn]. It may be that we will reach our end before the world does, just as the Mayans experienced catastrophic decline long before their calendar reached its last day.

One aspect of the 2012 phenomenon is easy to predict: For some, it will pay off handsomely. Predictions of the end sell books and generate interest. Authors Tim LaHaye and Jerry B. Jenkins hit pay dirt with their "Left Behind" series of best-selling novels. Scores of books and videos deal directly with 2012 prophecies.

The only thing the Bible says concretely about the end of the world is fairly clear. St. Matthew's Gospel records Jesus saying that "about that day or hour no one knows, not even the angels in heaven."

In the late 20th century, a software coding shortcut which listed years with only their final two digits in most programs led to predictions of catastrophe when the year 2000 arrived. There are also those who view the very real problem of climate change in apocalyptic terms. Predictions of intense solar activity in 2012 have led some scientists to worry about a catastrophic effect on Earth [source: Keim].

Meteotsunamis: How Winds Can Generate Catastrophic Waves
How to Prepare for a Flood
Do We Need a Category 6 for Hurricanes?