Are underpasses safe during a tornado? 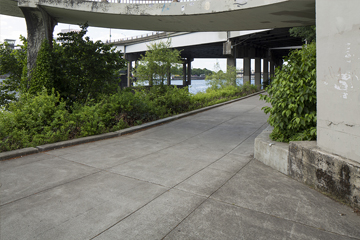 Yes, they're a structure, but that doesn't mean that underpasses are a good place to hide out during a tornado.
CGIBackgrounds.com/Getty Images

Perhaps you initially read this title incorrectly and thought the question was whether underpants were safe during a tornado. There are many reasons underpants would not be safe in a tornado – we'll assume you can figure out the big ones – but you might be surprised to learn that they'd make just about as good of a tornado shelter as an underpass. Before we get into why underpasses are pretty terrible places to hunker down in a twister, let's talk a little about the logic people employ when choosing these concrete tunnels as shelter.

It doesn't help that there are some famous anecdotal stories about weathering a storm in an underpass. People have done it, but they're lucky sons of guns [source: NWSFO]. Honestly, it's not a crazy thought – as we said, large concrete structures seem like a great place to ride out a storm with winds of hundreds of miles per hour. And in general, it really is a good idea to find a shelter in a tornado. But the key is that the shelter needs to be a well-constructed building or underground shelter. And, really, an underpass' specific construction makes it particularly unsafe.

As a tornado approaches an underpass, it will create a wind tunnel effect. The result is that the wind in the underpass will be stronger than the wind above it or on the ground. Remember, it's not just the cone-shaped part of the tornado that causes damage; the winds extend far beyond it. That means that even if the tip of the twister is above the underpass, the winds below and around it have enormous power.

This creates another underpass hazard: debris. The wind tunnel produced by the underpass is a perfect atmosphere for flying matter, big and small. Even fine matter can cause serious damage (think vision loss if particles get in your eye), and we don't have to tell you what big hunks of rubble can do. Remember, too, that when the tornado passes, the winds will suddenly change again, and debris will go haywire [source: OCSWA].

Just one more note of caution (as if you need more) about staying away from underpasses in a tornado. One hazard of lots of people crowding into an underpass is that they abandon their cars on the roadway, or at least leave them close enough to the road to be strewn across it by tornado-strength winds. This is a serious threat to emergency response vehicles and traffic that must get through the mess. Save yourself and save others by getting to the nearest safe shelter.

Inside the Weird Little World of Microclimates
Do We Need a Category 6 for Hurricanes?
10 Myths About Rainbows