Can you really outrun a flood?

by Alison Cooper
NEXT PAGE 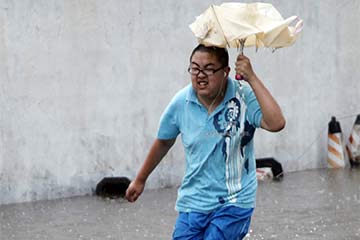 A man runs in a flooded street in Changsha, China in 2013. Floods and mudslides triggered by typhoon Utor killed 9 people in Hunan province.
ChinaFotoPress via Getty Images

Floods are responsible for more deaths each year than any other kind of severe weather event, beating out hurricanes, lightning and tornadoes. About 60 percent of these deaths occur in vehicles that have been driven into floodwaters. The next highest percentage is people who've walked into or near the waters [source: Cappella]. Presumably, some of these people were caught unaware by the flood. But most of them were probably trying to escape, to outrun the flood any way they could. If you find yourself in a flood situation, of course your instinct is going to be to get as far away from the floodwaters as possible. But there's no gray area in this one -- you definitely cannot outrun a flood.

Not only should you not attempt to outrun a flood, but you shouldn't try to go out in it, period. While it might be unbearably stressful or physically dangerous to stay where you are, it's undoubtedly going to be worse out in the elements. It's so easy to misjudge the depth and movement of floodwaters. What appears to be shallow and calm could easily turn out to be moving or deeper than you think, and it doesn't take much water to knock you off your feet. Water that's moving about as fast as you can walk -- 4 mph (6.4 kph) -- exerts a whopping 66 pounds per square inch (4.6 kilograms per square centimeter), and it increases exponentially to 264 pounds per square inch (18.5 kilograms per square centimeter) when it's moving 8 mph (12 kph). Six inches (15 centimeters) of moving floodwaters, in fact, can sweep a person away [source: Cappella].

And you'll be no better off if you get into your car. Being in the perceived safety of a heavy, sturdy vehicle might make you think you can brave deeper or faster-moving waters, but only a foot of water can pick up a car or small SUV. Six inches more and a large SUV or truck will float [source: Cappella].

Flash floods, of course, can be even more deadly and impossible to outrun. They occur when there's heavy rainfall in a relatively quick time period or if a dam or levee breaks. It's usually a matter of hours, although they've been known to happen after only a few minutes -- and sometimes even a half-inch -- of driving rain. There's often no warning of a flash flood, which can rage through low-lying or narrow areas in minutes, destroying everything in its path.

Driven by these sobering statistics, the National Weather Service initiated its "Turn Around Don't Drown" campaign, with the goal of educating the public about the dangers of venturing out -- on foot or in a car -- in flood conditions. It encourages flood awareness and stresses the utmost importance of staying put during floods and not going out into dangerous conditions, especially at night when vision is impaired. The Department of Transportation sanctioned new road signs with the slogan for use in flood-prone areas. These are preventable deaths, and the more people realize the impossibility of outrunning a flood, the better.