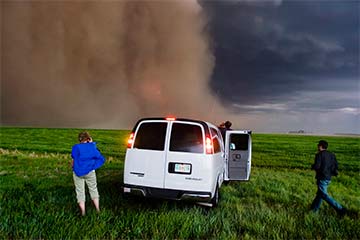 Tour guests dash back to the van as the changing sky takes a turn for the worse during a Tempest Tours storm chasing tour across the Great Plains of the U.S. in 2006.
Jeff Hutchens/Getty Images

It's a terrifying situation we hear about every year during tornado season: Storms bearing down on people trapped in their homes with no good shelter options within running distance. Some people do their best to hunker down at home, maybe crawling into a bathtub and covering themselves with mattresses and blankets. And some get into their cars or trucks and take off, attempting to outrun the storm.

Trying to outrun a tornado on foot is never a good idea: The average tornado moves along the ground at about 30 mph (50 kph), much faster than you can run [source: Weather Underground]. Driving away from the storm, however, does sound like a reasonable idea, especially if you're stuck in a flimsy building — or worse, a mobile home. Based on speed alone, a vehicle can easily outpace a tornado, so in a perfect world you'd be able to stay clear of the storm and reach safety

But there are just too many "ifs" in a tornado situation. The fastest twister on record raced across the ground at 73 mph (117 kph) [source: NWS]. Tornadoes do tend to move in a straight line, but they've been known to suddenly veer off course, too. There are also straight-line winds associated with tornadoes that can gust up to 80 mph (128 kph), easily tossing cars [source: Samenow].

The massive El Reno tornado, which ravaged a swath of Oklahoma on May 31, 2013, was the perfect example of such unpredictability. In a single minute, it grew from a mile (1.6 kilometers) wide to 2.6 miles (4.1 kilometers), the widest tornado in recorded history [source: Henson]. It contained multiple subvortices, smaller twisters rotating around the main one. Thousands of residents -- perhaps encouraged by newscasts and various media outlets -- tried to evacuate in their cars, which led to gridlocked interstates around Oklahoma City. Twenty-two people were killed, many of them in their vehicles [source: Associated Press].

The El Reno tornado was also notable in that four storm chasers -- at least one of whom had a stellar reputation for safety and conservatism during storms -- were killed trying to outrun the twister in their vehicles. Many experts hoped that their deaths might serve to hammer home the message that government organizations like the Federal Emergency Management Agency and the Centers for Disease Control and Prevention have been broadcasting to the public for years: If a tornado is coming, do not get into your car.

The CDC could not possibly be more explicit in its warning to anyone thinking about speeding away from a storm. "The least desirable place to be during a tornado is in a vehicle," its website states, adding, "DO NOT TRY TO OUTRUN A TORNADO IN YOUR CAR." But still it happens -- of the 60 people killed by the 1,200 tornadoes that touch down each year in the United States, 13 percent are in vehicles [source: NWS].

How is volcanic ash made?
Why Is Hurricane Irma So Powerful?
Is there any place on Earth that's safe from natural disasters?