Can a tornado cross a river? 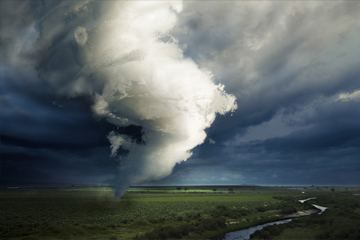 Can a tornado cross a river? A tornado can go wherever the heck it wants, whenever it wants.
fergregory/ThinkStock

Let's say you find yourself in Kansas, watching a tornado in the distance. You're holding onto Toto and impatiently looking at the approaching twister because you simply don't have the time this week to take an enchanted trip to Oz, what with your dentist appointment and that lunch date with your old college pal. What to do? You don't hide in a totally rickety farmhouse that clearly has a terrible foundation. (Why would that ever work, Dorothy? Get your head in the game.) Instead, you run to the nearest body of water and cross it, putting the water between you and the tornado. You watch the tornado get to the edge of the lake or river, where you triumphantly shake your fist at it as it retreats in unqualified defeat.

That's really creative thinking, and much respect for your presence of mind. However, you should be prepared for the fact that as you dance happily on the distant shore, the tornado absolutely will be on its way to annihilate you. Because, yes, a tornado can cross a river. Or a lake. Or pretty much any obstacle you – or nature – try to set in its way.

More to the point? A tornado can go wherever the heck it wants, and it does. The 1925 Tri-State tornado killed almost 700 people, injured more than 2,000, and as of 2014 was the deadliest in recorded history [source: Encyclopædia Britannica]. As you can tell from its name, it didn't respect state borders, and it took the same liberty with bodies of water, crossing both the Wabash and Mississippi rivers. The 1840 Natchez, Mississippi, tornado was even bolder, as it traveled down the center of the Mississippi River, destroying both shores along the way. The dead outnumbered the injured in the Natchez tornado, 317 and 109 respectively, and most were killed near or on the river [source: Nelson].

Don't forget that some tornadoes form on the water, or move from land to water. They're called waterspouts, and they have the same brand of terrible destruction. They mark their paths with hail, lightning and severe storms [source: NOAA].

What's our takeaway? Go to a designated shelter if possible, and – failing that – find a basement or room without windows on a ground floor and hunker down under a secure table. Stay away from windows. You bet your running shoes that you cannot "escape" a tornado by putting a body of water between you and its path.