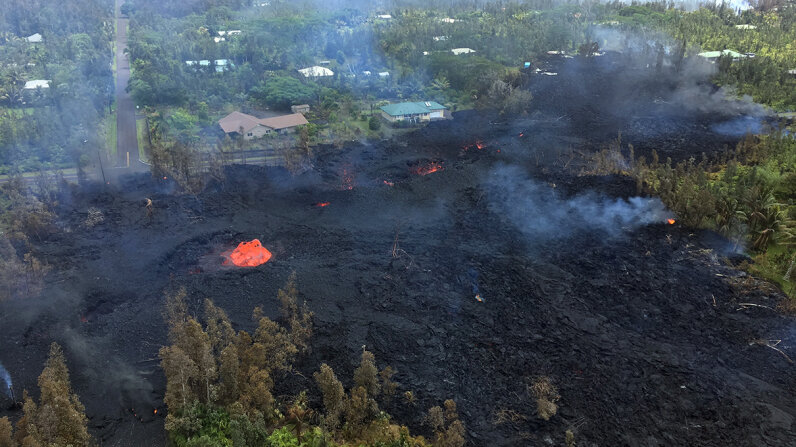 Fissure 7 (including a massive lava bubble burst) opened up on May 7, 2018 and actively spewed lava for several hours. USGS

If you've been following the news lately, you know about the lava devastating Hawaii's Big Island. Maybe you also saw that viral time lapse video of a fiery blob engulfing someone's car at the scene.

Recently, part of the Kilauea volcano — which is located by the island's southern shores — collapsed. This was followed by a series of earthquakes, including one that measured 6.9 on the Richter Scale. Since then, hot lava has been seeping up out of the ground through fissures in or near residential areas. Several Hawaiians have lost their homes and geologists don't yet know when the episode will end.

The same geologic force that built this state is currently destroying some of its communities. Without volcanism, there'd be no Hawaii. The tropical island chain was forged by a hot spot, an upwelling of magma that's located beneath the earth's surface and is unusually high in temperature. The one we're discussing today is out in the Pacific Ocean. In the late Mesozoic Era, magma from the hot spot penetrated the sea floor's crust. When magma reaches the surface of our planet, it becomes known as "lava."

Anyway, this prehistoric lava cooled down and hardened into rock. Solid rock began to accumulate, forming volcanoes which eventually created the Hawaiian island of Meiji about 85 million years ago. And that was just the warmup act. The hot spot went on to create all the other islands in the Hawaiian archipelago. Right now, it sits right under the so-named "Island of Hawaii" — also called "Big Island."

That particular landmass mostly consists of five big volcanoes. Two of them — Kohala and Mauna Kea — haven't erupted in millennia. But the others are still active, including Kilauea, the volcano that's caused so much trouble over the past few days.

Mighty Kilauea stands by the southeastern shore and makes up about 14 percent of all the Big Island's terrain. It's also downright hyperactive: Kilauea has been releasing lava more or less continuously since 1983. First-time visitors to Hawaii may be surprised by its appearance. Most people think of volcanoes as tall, steeply-sloped structures. Kilauea does not conform to this stereotype; instead, it's what geologists call a "shield volcano." These are wide, gently curved volcanoes normally made of low-viscosity, basalt-based lava.

It's best to think of Kilauea as a lava distribution center with multiple outlets. Reservoirs of magma are hidden under the volcano. Pressure is constantly driving some of this molten rock toward the surface. One escape route is Halemaumau, a crater near the volcano's zenith, which holds a standing lake of lava. Then there's Puu Oo, another crater down by Kilauea's base.

Earthquakes have been rocking the area lately and on April 30, a section of Puu Oo's crater floor collapsed. That triggered even more earthquakes, which haven't done the locals any favors. Increased seismic activity is driving magma away from both Puu Oo and the summit of Kilauea. The lake at Halemaumau has fallen by 722 feet (220 meters) so far and scientists don't know how long the draining process will continue — or if it'll ever be reversed.

Meanwhile, an underground influx of magma is traveling toward a rift zone on the mountain's eastern side. Rift zones are sections of a volcano where the surface rock is weak, thin and prone to cracking. The new rumblings at Kilauea's east rift zone have produced long ventilation fractures — or "fissures" — in the ground.

Lava from fissure 7 is seen here from a different vantage point as it slowly advances through the Leilani Estates subdivision in Kilauea's lower east rift zone.
USGS

On Thursday, May 3, fissures started to appear in the district of Puna. The big cracks provided an easy escape route for magma, which came sputtering out of them in the form of lava. Intermittently, the number of eruptive fissures has gone up: By Tuesday, May 8, there were 14 overall.

Though no human fatalities have been reported yet, the creeping lava's devoured at least 35 buildings — including 26 homes. The lava is high in iron, but low in silica, which makes it viscous and slow-moving. Unfortunately, lava speed is not the only safety issue that the authorities must consider. Toxic sulfur dioxide gas is being released with the lava. This can lead to acid rain and create respiratory problems for those who get too close.

As of today, more than 7 billion cubic feet (198 million cubic meters) of lava has escaped the fissures and oozed across the Big Island. The authorities ordered 2,000 residents to evacuate, but some chose to linger behind. In response, the police have been going door-to-door to clear civilians out of Leilani Estates, a hard-hit area located 12 miles (19 kilometers) from the volcano. Governor David Ige has asked for federal relief as Kilauea continues to devastate roadways, neighborhoods and crops.

Is there an end in sight? Geologists warn that more lava may soon be on its way and Talmadge Magno — Hawaii County's Civil Defense Administrator — has informed the press that the fissure eruptions "show no sign of slowing down." The U.S. Geological Survey also issued an alert on May 9 warning residents that the continued dropping of the lava lake at Halemaumau at Kilauea's summit raises the "potential for explosive eruptions in the coming weeks."

Still, past incidents can tell us a little bit about what we can expect once this entire thing finally blows over. Fissure eruptions tend to leave dikes in the ground. These are intrusions of igneous rock that cut through existing layers in the crust and frequently assume a speedbump-like appearance. The eruptions also build ramparts of rock.

While the destructive power of volcanoes can't be denied, they're also creative things. Already, cooling rock from the 2018 Kilauea fissure eruptions have generated over 494 acres (200 hectares) of new land. Dangerous as volcanoes are, we benefit from them as well.

Now That's Interesting
The Hawaiian hot spot is a fixed point under the restless Pacific tectonic plate. For eons, this plate has been moving to the northwest at a leisurely pace of 3 or 4 inches (7.6 to 10 centimeters) per year. New islands were created as the plate was dragged over the hot spot. That's why the oldest landmasses in the Hawaiian archipelago are at its northwestern tip. As you travel to the southeast, the islands get progressively younger. Youngest of all is Big Island, which also happens to be the largest.