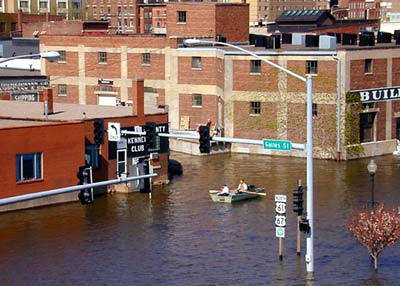 Heavy rains in the spring of 2001 flooded Davenport, Iowa. Until the waters subsided, locals had to get around town by rowboat.
FEMA News Photo

In the last section, we saw that floods occur when an atypical volume of water collects in an area. There are a number of ways this might happen, and there are a wide range of events that occur when it does.

The sort of flooding that most people are familiar with occurs when an unusually large number of rainstorms hit an area in a fairly short period of time. In this case, the rivers and streams that divert the water to the ocean are simply overwhelmed. The varying temperatures of different seasons leads to different weather patterns. In the winter, for example, the air over the ocean might be warmer than the air over the land, causing the wind flow to move from the land out to sea. But in the summer, the air over the land heats up, becoming warmer than the air over the ocean. This causes the wind current to reverse, so that more water from the ocean is picked up and carried over land. This monsoon wind system can cause a period of intense rain that is completely out of step with the climate the rest of the year. In some areas, this flooding may be exacerbated by excess water from melting snow.

Perhaps the best known example of seasonal flooding is the annual expansion of the Nile River in Egypt. In Ancient Egypt, monsoon rains at the source of the river would cause the waterway to extend out a good distance during the summer. In this case, the flooding was not a disaster, but a godsend. The expanding waters would l­eave fertile silt all along the banks of the river, making the area ideal farming land once the river had subsided again. This is one of the main factors that allowed civilization to thrive in the Egyptian desert. These days, the river is blocked off by a dam upstream, which collects the summer rain and doles it out throughout the year. This has extended the planting season so that Egyptian farms can grow crops year-round.

Another common source of flooding is unusual tidal activity that extends the reach of the ocean farther inland than normal. This might be caused by particular wind patterns that push the ocean water in an unusual direction. It can also be caused by tsunamis, large waves in the ocean triggered by a shift in the Earth's crust.

Floods may also occur when a man-made dam breaks. We build dams to modify the flow of rivers to suit our own purposes. Basically, the dam collects the river water in a large reservoir so that we can decide when to increase or decrease the river's flow, rather than letting nature decide. Engineers build dams that will stand up to any amount of water that is likely to accumulate. Occasionally, however, more water accumulates than the engineers predicted, and the dam structure breaks under pressure. When this happens, a massive amount of water is released all at once, causing a violent "wall" of water to push across the land. In 1889, such a flood occurred in Johnstown, Pennsylvania. The townspeople were warned that the flood was coming, but many dismissed the alert as unfounded panic. When the rushing wall of water did hit, more than 2,000 people were killed in only a few minutes.

The severity of a flood depends not only on the amount of water that accumulates in a period of time, but also on the land's ability to deal with this water. As we've seen, one element of this is the size of rivers and streams in an area. But an equally important factor is the land's absorbency. When it rains, soil acts as a sort of sponge. When the land is saturated -- that is, has soaked up all the water it can -- any more water that accumulates must flow as runoff.

Some materials become saturated much more quickly than others. To see how this works, just take a bucket of water outside and try wetting various surfaces. Soil in the middle of the forest is an excellent sponge. You could dump several buckets of water on it and it would soak the water right up. Rock is not so absorbent -- it doesn't seem to soak up any water at all. Hard clay falls somewhere in between. Generally, soil that has been tilled for crops is less absorbent than uncultivated land, so farm areas may be more likely to experience flooding than natural areas.

One of the least absorbent surfaces around is concrete. In the next section, we'll see how concrete, asphalt and other human construction can affect flooding.