Did global warming cause Hurricane Sandy? 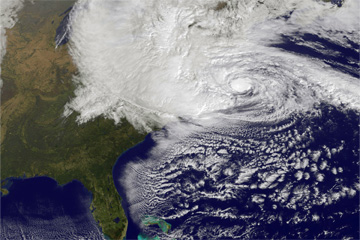 In this NASA satellite image, Hurricane Sandy churns off the East Coast on Oct. 29, 2012, in the Atlantic Ocean. No doubt the hurricane that made landfall as a cyclone left immense destruction in its wake, but was it related to global warming? See more pictures of Hurricane Sandy.
NASA/Getty Images

When Hurricane Sandy hit the East Coast in late October 2012, the forecasters referred to it as a Frankenstorm. That's not just because it had an eerie Halloween drop date. It's also because the hurricane hooked up with a really early nor-easter and was blocked by a big high-pressure system from the north, and it mutated into a real monster.

But it was after the hurricane had landed and the damage was done that another tempest began brewing. When New York City Mayor Michael Bloomberg endorsed Barack Obama's re-election campaign, his endorsement hinged not just on Obama's response to the storm, but Bloomberg's belief that Obama "sees climate change as an urgent problem that threatens our planet" [source: Bloomberg]. While climate change had been mentioned as the storm approached, Bloomberg effectively stamped "global warming" on Sandy's forehead with his endorsement.

Can we say that global warming is the cause for extreme weather, and Sandy in particular? It's hard to argue a direct causal relationship, when extreme weather events have been around forever. After all, hurricanes, winter storms and tsunamis aren't 21st-century inventions.

But there's a difference between saying that Hurricane Sandy was caused by climate change and saying that climate change is causing weather to swing in extreme ways and create storms with more impact. There's a growing consensus among climate scientists that global warming is creating variables that make storms (and other weather occurrences) more extreme [source: Fischetti].