Did global warming cause Hurricane Sandy?

Raindrops Keep Falling on Our Heads 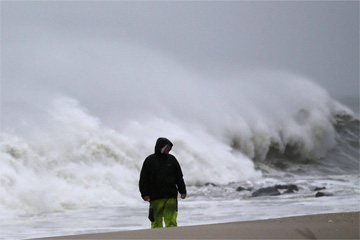 In some parts of the U.S. Northeast, Sandy's storm surge was record-breaking. This gentleman is standing on New Jersey's Cape May beach as surf from Sandy thunders onto the shoreline.
Mark Wilson/Getty Images

So Hurricane Sandy was no run-of-the-mill occurrence -- it even broke some records, like storm surge levels at NYC's Battery Park that were 4 feet (1.2 meters) higher than the previous record set in 1960 [source: Ruquet]. But does that mean that it was a true freak of nature or that it was a sign of climate change in general?

Taking a look at weather patterns at large, we can see a few trends. One is that rainfall in the tropics is getting heavier. A 2012 Massachusetts Institute of Technology study based on data from the last 20 years predicted that for every one degree Celsius temperature increase, there will be a 10 percent heavier tropical rainfall. The study's author said there seems to be a higher sensitivity to global warming in the tropics [source: MIT]. Which is potentially alarming -- but what does it have to do with Sandy?

Tropical rainfall can be a catalyst for cataclysmic weather. Hurricanes don't just create themselves; they begin in the tropics, where they move from disturbance to depression to storm, before being labeled a hurricane. So the finding that tropical rain is getting heavier might indicate that a storm has a better chance of getting bigger and more powerful, morphing into a behemoth like we saw with Sandy. As rains swirl around a storm's center, they're adding more heat, and creating a self-sustaining energy source [source: Weather.com]. Sandy eventually clocked in as the second-largest Atlantic storm on record, with its winds spanning out 580 miles (933 kilometers) [source: Duke].

On a related note, many also regard a warmer atmosphere and oceans as controlling factors for bigger storms; more moisture is going to be created, and thus dump on us merrily when storms hit. Many scientists point to this phenomena -- increasing rainfall -- as a signal that global warming won't necessarily bring us more hurricanes or storms but rather much more intense events [source: Trenberth].

Another factor that made Sandy unique was the cold northern jet stream (a current of high-speed winds) that dipped south, touching the warm tropical storm and causing a renewed blast of energy. Atmospheric scientists have noticed that as the Arctic sea ice melts, the jet stream is more likely to move in big wavy patterns, as it did with Sandy. Those patterns are courtesy of something called the North Atlantic oscillation, a defined region of pressure fluctuation. And the Arctic Sea ice melting, of course, is often considered a symptom of global warming [source: Fischetti].

Need some more info on weather and warming? You'll find many more articles to satisfy your inner weather junkie below.

While most scientists (and the media who report on them) are willing to point out global warming factors that could contribute to a severe weather episode, I would be remiss to imply that there aren't detractors. For a fascinating look at one denier -- who just happened to be in charge of the Hurricane Sandy Wikipedia page -- check it out here.