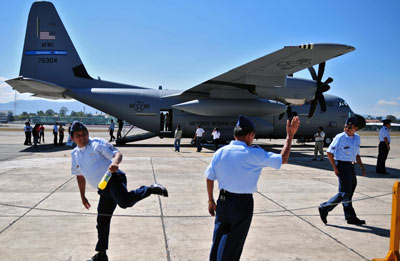 A WC-130J Hurricane Hunter on display at Guatemala's air force base in Guatemala City in March 2008.
AFP/Getty Images

To monitor and track the development and movement of a hurricane, meteorologists rely on remote sensing by satellites, as well as data gathered by specially equipped aircraft. On the ground, Regional Specialized Meteorological Centers, a network of global centers designated by the World Meteorological Organization, are charged with tracking and notifying the public about extreme weather.

The Hurricane Hunters are members of the 53rd Weather Reconnaissance Squadron/403rd Wing, based at Keesler Air Force Base in Biloxi, Miss. Since 1965, the Hurricane Hunters team has used the C-130 Hercules, a very sturdy turboprop plane to fly into tropical storms and hurricanes. The only difference between this plane and the cargo version is the specialized, highly sensitive weather equipment installed on the WC-130. The team can cover up to five storm missions per day, anywhere from the mid-Atlantic to Hawaii.

The Hurricane Hunters gather information about wind speeds, rainfall and barometric pressures within the storm. They then relay this information back to the National Hurricane Center in Miami, Fla. If you're curious about these foolhardy pilots, read Why would someone fly an airplane into a hurricane?

Meteorologists take all the storm data they receive and use it to create computer forecast models, called spaghetti models. Based on a great deal of current and past statistical data, these virtual storms allow scientists to forecast a hurricane's path and changes in intensity well in advance of landfall. With this data, governments and news agencies ideally can warn residents of coastal areas and greatly reduce the loss of life during a hurricane.

­Long-term forecasting now allows meteorologists to predict how many hurricanes will take place in an upcoming season and to study trends and patterns in global climate.