by John Donovan Sep 21, 2018
Members of the South Carolina National Guard direct traffic after the government ordered all lanes leading away from the coast open to facilitate the mandatory evacuation ahead of Hurricane Florence. Joe Raedle/Getty Images

When the latest storm of the century is chugging slowly toward your neighborhood and your entire life seems a good gust away from going six feet underwater, maybe the last thing you need is Big Brother telling you to get the heck out of town.

This is your home, after all. That's your TV. Your car. All your stuff. Your entire existence. Fight, for many, often wins out over flight. But, truth is, when Big Brother orders you to head for higher ground, it's probably best to listen. And do it. Just in case.

The decision to order an evacuation can be just as difficult for government officials to enact as it is for those who have to decide to evacuate once an order is in place. Storms are tricky, after all, and the science of predicting just how serious they'll be is far from exact. Urging people to abandon their homes and businesses to shutter storefronts can be life-altering both immediately and in the long term.

But ultimately, the choice to sound that horn rests on the states affected. "Disasters always occur at the local level," says the Federal Emergency Management Agency (FEMA) Disaster Sequence of Events training manual. By the time an evacuation is considered, Emergency Operations Centers (EOCs) throughout the states already have been activated. The local disaster plan is already in motion. If the resources to deal with a natural disaster at the local level aren't sufficient, the state probably has been enlisted to help. The state, if it deems the threat is serious enough, can request federal assistance.

"The governor can make the call and compel an evacuation, but the power of decision also rests on the local officials," Sarah DeYoung, an assistant professor in the University of Georgia's Institute for Disaster Management, says. "For many states, such as North Carolina, that means the state EOC is communicating with the county and city level EOCs. The evacuation steps vary based on the characteristics of the state and the hurricane, but the factors that emergency managers look at in making this decision [are] earliest time of arrival of tropical storm force winds, clearance time for evacuation of the people living within the mandatory evacuation zones, and other contextual factors such as tourists possibly being in that area in that time of year."

Coastal states like the Carolinas already have evacuation plans and designated routes in place. Zones have been drawn up to determine which residents go first in order to make evacuations as quick and orderly as possible. Models are run to determine how many cars an individual escape route can handle.

Most states and the federal government have resources (like ready.gov and, as a state example, readync.org) to explain what those fleeing the storm need to do, and when they need to do it. Local, state and federal authorities use all sorts of media to spread the word.

"The thing is, when you have a staggered evacuation, it can work very well," DeYoung says. "You will have a larger clearing time that's designated for people who are in the [for example, Florida] Keys, or on the Outer Banks of North Carolina. They will be told to go hours or sometimes days in advance of the inland communities, or even the coastal communities. There's sort of a science to the algorithm of who goes first."

Sometimes evacuations go smoothly. Sometimes, for various reasons, they don't. Sometimes the decision to order an evacuation is OK'd by all. Sometimes, as was the case with Hurricane Harvey in Houston in August 2017, there are disagreements.

"If you do it or attempt to do it and it's not coordinated, not done right, you are literally putting people in harm's way, and you're creating a far worse situation," Houston Mayor Sylvester Turner, who clashed with the Texas governor on evacuations, said as Harvey approached the city. "You cannot put, in the city of Houston, 2.3 million people on the road. That is dangerous. When you combine Houston and Harris County, you literally cannot put 6.5 million people on the road."

Possibly factoring into Turner's decision in 2017 was a disaster in 2005, when 2.5 million Houstonians fled as Hurricane Rita struck. More than 100 died in that evacuation.

Some communities in Houston did end up evacuating during Harvey, and the death toll was much lower than what might have been expected for a storm that dropped a record 5 feet (1.5 meters) of rain on the city. Overall, about 100 died in Harvey, though it's hard to break out what part evacuations may have played in either causing or preventing those deaths.

Studies have shown that the poor, the ill and the elderly are those least likely to be able to evacuate potentially deadly storms like Hurricane Florence.
Joe Raedle/Getty Images

Some People Have Little Choice

Most people who fail to evacuate in the face of an oncoming natural disaster aren't the too proud or too stubborn, but rather they lack the means to leave. Many studies have shown that the poor, the ill and the elderly are affected to a greater extent than other populations when faced with potentially deadly storms. These groups either can't get out by themselves or can't afford to.

That's one of the reasons Hurricane Katrina so devastated New Orleans in 2005. One 2006 study from Tulane University showed that those in New Orleans with household incomes in the range of $40,000 to $50,000 were twice as likely to leave before the floods than those with incomes between $10,000 and $20,000. Most who stayed and had to be relocated didn't have cars or other ways out. Some 49 percent of the 1,800 deaths in Katrina were people 75 or older.

Federal funds, released once the president declares a disaster area and evacuations are ordered, can help rescue, transport, feed and house the more at-risk population. But getting them out earlier would be a good idea, too, and that takes a little foresight.

"There needs to be an understanding that people need resources to evacuate," DeYoung says. "What's the long-term effort to reduce disparity between those who have the resources and those who don't?"

The Few, the Stubborn

So-called mandatory evacuations are mostly just that: "so-called." Officials will plead to get the able-bodied on their way. They may even employ scare tactics; they'll ask those who stay behind for names of next of kin, for example, or have them write their Social Security numbers on their arms. Some states and localities, wary of the cost of plucking the recalcitrant stay-and-fight crowd off rooftops and out of deep water (not to mention the danger to first responders who are doing the plucking), may threaten fines or jail for those who stick around.

But fines and jail for those in the grips of a natural disaster almost never happen, DeYoung says. Mandatory, in the end, means little more than strongly advised.

Those with the means to bolt sometimes stay for decidedly non-smart reasons. Some are afraid of looters, something, DeYoung says, that is a "well-known disaster myth." They'll see blue skies and decide the forecasters are all wrong. They'll accuse officials of going overboard, preparing for the worst, although DeYoung says studies show that the "cry wolf effect" is "not as harmful as we might think."

In the end, all officials can do for those who have a choice between fight or flight is offer up a simple fact: Standing your ground against Mother Nature may come at a serious cost.

NOW THAT'S INTERESTING
During Hurricane Irma in September of 2017, Florida Gov. Rick Scott ordered the evacuation of an estimated 6.5 million people. Some orders were "voluntary" and some were "mandatory," but they covered counties from Monroe (Key West, at the southernmost tip of the state) all the way up the coast to Duval (Jacksonville, just below the Georgia line) and as far west as Piniellas (west of Tampa, on the Gulf Coast). It's believed to be the largest hurricane evacuation in U.S. history.

What a Tangled Web a Few Squirrels' Tails Can Weave 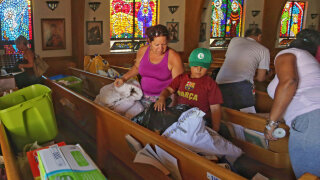 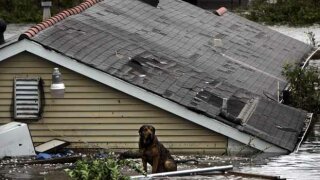 10 Worst Hurricanes of All Time 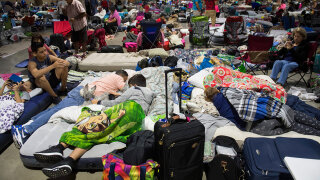