Life for a planet circling around the early solar system was no day at the beach, with cosmic collisions packing a real punch. In fact, planetary scientists have determined that in Mars' ancient past, "mega-tsunamis" swept across the planet after two separate large meteorites struck the red planet, permanently changing the Martian terrain — but also leaving evidence Mars was once covered in cold, salty oceans.

This all happened 3.4 billion years ago, before life on our planet existed and around the same time Earth was besieged during a period of asteroid impact known as the Late Heavy Bombardment.

The research, published today in the journal Scientific Reports, identifies two major impacts that happened millions of years apart. The first struck an ocean of liquid water, triggering a tsunami whose existence the scientists discerned from widespread backwash channels sluiced into the Martian landscape by water receding back to the ocean.

The second event took place millions of year later, after Martian climate had changed so significantly that the oceans were composed primarily of frozen water. The power of the asteroid strike sent rippling ridges of ice across the planet, once more altering its shorelines so much that billions of years later we can detect the evidence.

Imagine a massive impact creating a wave of frozen ice and slush sloshing across the planet's surface, as though Jupiter had a few too many at a solar system pool party, tripped on Saturn's rings, and knocked the frozen margarita machine all over Mars' face.

"These lobes froze on the land as they reached their maximum extent and the ice never went back to the ocean - which implies the ocean was at least partially frozen at that time," said astronomer Alberto Fairén, one of 14 study co-authors, in a press release announcing the discovery. "Our paper provides very solid evidence for the existence of very cold oceans on early Mars."

He added, "It is difficult to imagine Californian beaches on ancient Mars, but try to picture the Great Lakes on a particularly cold and long winter, and that could be a more accurate image of water forming seas and oceans on ancient Mars."

The big question everyone asks about Mars, though? (You know the one.) The researchers certainly have an answer for you.

"Cold, salty waters may offer a refuge for life in extreme environments, as the salts could help keep the water liquid," said Fairén, noting that the well-defined boundaries of the icy lobes suggest the ancient ocean was briny. "If life existed on Mars, these icy tsunami lobes are very good candidates to search for biosignatures."

Kuwait to Collect DNA Samples From All Tourists, Visitors and Citizens 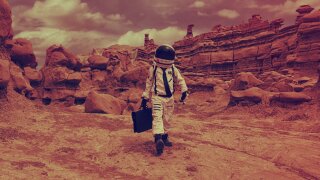