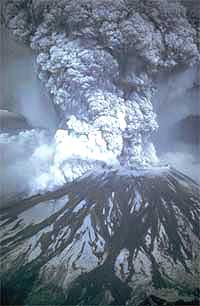 If you snapped a picture of Mt. St. Helens at the beginning of 1980, it appeared to be an ordinary mountain. At 9,677 feet high, it was the fifth-highest place in Washington State and had a snow-capped peak just like any other mountain did in January.

Then in March 1980, a small earthquake (4.1 on the Richter scale) occurred. This earthquake was located directly underneath Mount St. Helens and it was the first sign that something was happening in a volcano that had been dormant for more than a century. A week later, an explosion blew out a 250-foot diameter crater on the peak and covered the snow on the top of the mountain with ash.

Over the next several weeks there were more earthquakes. Explosions blew ice and ash into the sky. The crater expanded. And there were two indicators that magma was moving inside the mountain. First, the earthquake tremors that scientists were seeing had a pattern that signals magma movement. Second, the side of the mountain started to bulge outward.

Then, on May 18, all hell broke loose. A 5.1-magnitude earthquake triggered a landslide, which took off pressure that had been holding in magma. And with that release, a gigantic explosion occurred. It is hard for us to imagine the size of the explosion, but it was like a small nuclear bomb. Something approaching a cubic mile of earth, rock and ice blasted away from the mountain. The altitude of Mt. St. Helens fell by more than a thousand feet to 8,360 feet and one side of the mountain disappeared. The blast leveled trees in a 100,000+ acre swath of land, and even today that land is still recovering. Fifty-seven people were killed or went missing.

You can see the mountain today both in-person and through satellite imagery. The scars, ash and erosion are all plainly visible in this Google Earth image:

Mount St. Helens from the air

Or you can drive up and see it yourself. Either way, you are witnessing the aftermath of what was the biggest landslide in human history, as well as a massive natural explosion.

For lots more information on Mount St. Helens and volcanoes, check out the links on the next page.

Quiz: Are You Prepared for the Next Disaster?
Earth Hits 400 Straight Months of Hot
Does thunder in the winter mean snow is coming?