Could you really outrun a blast of deadly cold?

by Alison Cooper
NEXT PAGE 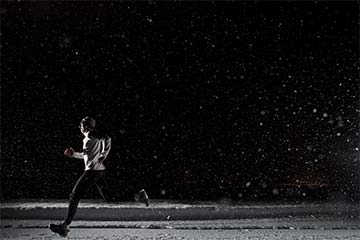 Lack of visibility would certainly hamper you if you were trying to outrun a blizzard -- not to mention high wind speeds and cold temperatures.
Heath Korvola/Getty Images

A "blast of deadly cold" can take many forms. It might be an unexpected gust in a blizzard, a shot of icy air coming off the Great Lakes or a sudden ice storm tearing around Mount Everest, surprising you as you make your way up the North Ridge route. Regardless of the blast's speed or what form it takes, you're going to have a tough time getting away from it.

If you're outside in conditions where a deadly cold blast could happen, temperatures will be well below freezing, so chances are that you won't be clad in optimal running gear (and if you are actually in running gear, you'll be in danger of getting hypothermia). At the very least you'll have a bulky coat and boots on, and you won't be able to move very quickly, over ground that's most likely already covered in snow and ice.

If you're out hiking in the winter or on a mountain in snowy conditions, you would be at even more of a disadvantage. You would presumably have a lot of clothes on, perhaps a snowsuit, crampons on your feet and a heavy pack on your back, making quick movements nearly impossible. You could also be caught in a treacherous spot and not even be able to run or move.

Visibility would be another strike against you in your attempt to escape the deadly cold. A blizzard, by definition, is a snowstorm with sustained winds of 35 mph (56 kph) over a three-hour period, with visibility at less than a quarter of a mile (.4 kilometer). In a severe blizzard -- which would be more likely to deliver an even more dangerous cold blast -- the temperature would be below 10 degrees Fahrenheit (minus 12 degrees Celsius) with sustained winds of more than 45 mph (72 kph) and visibility near zero [source: Weather.com]. If you're having a hard time seeing your hand in front of your face while you're stumbling over the icy ground, the cold blast will overtake you pretty quickly.

It should go without saying that you shouldn't try to outrun the icy blast in your car, either. You'd obviously be putting other lives in danger besides your own if you decide to speed your car down an icy road with next to no visibility. But if you're already in your car when conditions become dire, stay with your vehicle -- don't brave the elements on your own. If the car is totally stuck, hunker down and run the engine for 10 minutes each hour so you can get some heat and also ensure that the car will start later. Raise the hood to signal that you're in distress and tie something brightly colored to your car's antenna.

Whatever you do, don't try to outrun a blast of deadly cold. You need to be indoors, so find shelter wherever you can and stay put!