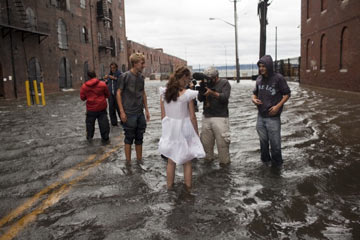 Sometimes they get it right, sometimes they get it wrong. But one thing is for sure: When it comes to media reporting of severe weather events, the threat of a hurricane, tornado or even a heck of a lot of snow is not likely to go unnoticed for lack of coverage.

And with good reason. In the 24 hours leading up to Hurricane Sandy's devastating blast through New York and New Jersey, the Weather Channel brought in more than 2.035 million viewers, not to mention a record 300 million page views on its Web site. These TV ratings were far better for than any other cable network covering the storm [sources: Szalai, Richwine].

Sandy, of course, is a perfect example of a storm whose media-fed hoopla was warranted. "I still think there is a tendency, in the wake of Katrina, to cast every storm as a potential Category 5 killer," media critic Howard Kurtz said of the Sandy coverage. "But given the magnitude of Hurricane Sandy, which killed at least 33 people in the United States and knocked out power to more than 7.5 million, the media hype was more than justified" [source: Kurtz].

In the ratings game, whether a storm actually lives up to the hype is mostly an afterthought. Consider Hurricane Irene, which threatened the eastern seaboard in late August 2011. Here's Kurtz on the coverage of that storm, which turned out to be a relative dud (coming ashore as a tropical storm): "The tsunami of hype on this story was relentless, a Category 5 performance that was driven in large measure by ratings" [source: Kurtz].

Ratings indeed: The Weather Channel's 2.77 million viewers on the Saturday the storm was scheduled to hit land outpaced the numbers for Sandy, a much more brutal storm. Some of the difference was lost to competitors like Fox News, while power outages, increased Web site views during Sandy and perhaps a little hype fatigue may have also played a role [sources: Ariens, Leslie].

In Katrina's aftermath, politicians and city and state officials are only too eager to follow the freakout drumbeat. After seeing what a failure to properly respond to a weather threat did for the likes of George W. Bush, New Orleans mayor Ray Nagin, and former FEMA chief Michael Brown ("Heckuva job, Brownie!") local leaders probably figure it's better to go all in.

But a couple of swings and misses by the hype machine could lull amateur storm watchers into a false sense of security. Does severe weather hype cause people to under-react when a storm's a brewing? Read on to find out.

Maybe it's global warming or simply the barrage of newscasters braving the elements to report from storm-ravaged areas mid-destruction -- most notably CNN business reporter Ali Velshi, who for some reason spent his 43rd birthday knee-deep in a Sandy-flooded intersection of Atlantic City -- but it sure does seem like our weather patterns are getting more extreme.

Not so, according to a 2011 study by the Twentieth Century Reanalysis Project, which showed no evidence that weather trends have intensified in recent years [sources: Keene, Jolis].

Perhaps then it's just the hype surrounding severe weather events that has ramped up of late. During the week it made landfall, Hurricane Irene comprised 21 percent of all news covered, trailing only coverage of Middle East-related tensions, which garnered 26 percent of the news focus, according to the Project for Excellence in Journalism [source: Meyers].

But it's not just the sheer amount of coverage of severe weather that feeds the hype machine. There's also something about the way in which these events are covered. It is a fundamental principle of journalism that speed should not be traded for accuracy. Yet it seems that some of the most intrepid of reporters are at times swept up in the fury of big weather.

For example, take the widely reported, yet completely false rumor that during the height of Sandy's onslaught on Manhattan, the floor of the New York Stock Exchange was flooded with up to 3 feet (1 meter) of water. This little nugget of information was never confirmed -- because it simply wasn't true -- but with water gushing all over the island (and Ali Velshi being whipped around by the wind in nearby New Jersey), it appears there was simply no time to worry about mundane matters like factual accuracy [source: Keene].

That's not to mention the way in which potential weather events are described. Reporters, government officials and experts who use terms like "catastrophic," "historic," and "unprecedented" to describe a storm without explaining just what makes a particular weather system unique do nothing but water down the gravity of these words. There are only so many times one can hear that a particular storm is the "big one" before he stops heeding warnings all together [source: Wemple].

But it's not just hype that leads people to underestimate severe weather. There are other reasons why some of us assume that all reports of oncoming storms are simply crying wolf.

Here's the skinny, according to writer and Miami Herald columnist Carl Hiaasen: "The first rule of hurricane coverage is that every broadcast must begin with palm trees bending in the wind. Never mind that the puniest summer squall can send a coconut palm into convulsions; your producer will demand this meaningless shot. Once the storm begins, you can forget about swaying palm trees and concentrate on ficus, banyans, oaks and Australian pines -- the ones that actually go down" [source: Hiaasen].

Why We Fight (Evacuation Orders) 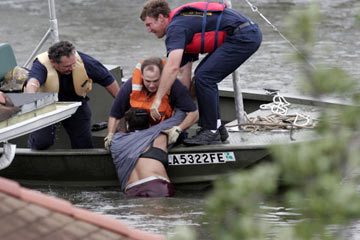 Rescue workers pull a woman from the water who was hanging onto the roof to escape the rising flood waters from Hurricane Katrina.
Chris Graythen/Getty Images

Sandy and Irene weren't the first two storms to receive overwhelming attention before touching down. As Hurricane Katrina approached the Gulf Coast in August 2005, reporters swarmed to New Orleans, and Mississippi while officials warned residents of low-lying areas to run for it. Yet many chose ride out the storm.

In hindsight, some will certainly argue that this was one storm that was under-hyped: evacuation orders in New Orleans, for example, didn't include a warning that levees could break as a result of the storm [source: Rosenthal]. Yet the Sandy experience -- with many residents of the hardest-hit areas also choosing to wait out the storm in spite of "mandatory" evacuation calls -- is a testament to the fact that at least some people may never believe the hype associated with severe weather.

There are a number of behavioral factors behind the decision to batten down the hatches when the "big one" comes, even when the experts are telling you to get the hell out of Dodge. The first is called "unrealistic optimism," which, as its handle suggests, refers to a super glass half-full mentality. Some people just don't think anything seriously bad can happen to them. "Motivated reasoning," meanwhile, is a related behavioral pattern in which a person simply dismisses all the signs that the worst-case scenario (a direct hit from a hurricane, for example) may happen [sources: Ablow, Sunstein].

Where the hype comes in is by causing what is called "availability bias." In other words, a person considering the risks of a certain event -- an oncoming storm, perhaps -- may compare it to past similar events. After a handful of overhyped weather patterns, people in the danger zones of an oncoming storm may start to assume that the Weather Channel is selling wolf tickets, so to speak. Also called "the availability heuristic," this phenomenon has been attributed to many victims of Katrina, whom after years of hype and misses, simply believed the storm would pass them by once again [source: Sunstein].

Whether it's the next Irene or another Sandy, hype isn't the only reason why some people may underestimate the next superstorm, but it certainly doesn't help.

In case the last three pages haven't convinced you of the role of hype in severe weather preparation, maybe this personal anecdote will do the trick. As a Brooklyner preparing for Irene to touch down in the Big Apple last year, like most of my neighbors, I kind of freaked out a little bit. It was hard not to, not simply because of the non-stop news coverage but also because of the boarded up storefronts and bodegas with long lines and handwritten signs like "out of water" and "no more flashlights." So I stocked up on water, food, D batteries and, of course, beer. Meanwhile, my roommate mocked the panic and ordered two large pizzas. Then it happened. And by "it" I mean "nothing." When Sandy came knocking more than a year later, I had relocated to Washington D.C. This time around, I kept walking past the groceries and convenience stores and instead ordered a large pie.

10 Pieces of Disaster Safety Advice You Should Ignore
New Jersey's Pinelands Are Ripe for an Australia-type Wildfire
200 Years Ago, We Had a Year Without a Summer 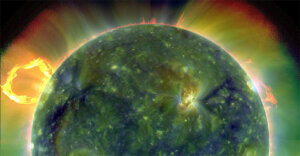 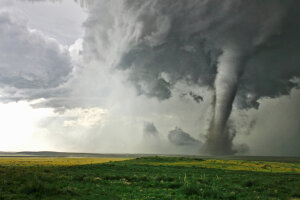 10 Must-haves in a Storm Survival Kit