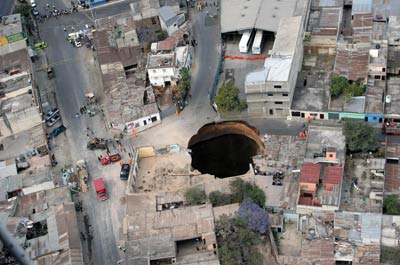 Aerial view of the huge hole in Guatemala City after the sewage system collapsed. If you look at the surrounding buildings, you can see how big that scary sinkhole is.
Orlando Sierra/AFP/Getty Images

Sinkholes aren't always a grave danger. Sometimes, depending on their size, they're just an inconvenience. It's their sudden or deceptively large appearance that makes sinkholes dangerous, both to human safety and to buildings and infrastructure. Construction projects frequently have to contend with the specter of sinkholes brought on by broken pipes or careless drilling. These geologic cavities can be expensive to repair, voracious in their appetite to swallow homes and cars, and toxic in their ability to contaminate groundwater supplies by sucking up debris or sewage.

­Flooding looms as a particular concern when it comes to sinkholes. We already discussed how flooding contributes to sinkhole development, but sinkholes can also factor in to the flooding of a surrounding area in several ways. If the outlet that connects a sinkhole to a conduit or water supply, such as an underground stream, becomes filled with trash and debris, water has nowhere to flow. The basin or sinkhole then fills with water, causing flooding. Sinkhole flooding can also occur simply because water enters a sinkhole more quickly than it can drain through a conduit or other outlet. The last flooding scenario happens when an overflowing river is connected to a sinkhole via underground streams and conduits. Water flowing through the sinkhole would normally drain into the river. But because the river is already flooded, flow reversal takes place and excess water shoots back into the sinkhole, filling it with water and potentially flooding the surrounding area.

Sinkholes can appear suddenly and with great violence, and they're something that any city planner or engineer must keep in mind. One notable, tragic case of this type occurred in Guatemala's capital, Guatemala City. Early in the morning on Feb. 23, 2007, a 330-foot (101-meter) deep sinkhole appeared almost instantly, killing at least three people and devouring homes in a packed urban area. The ground shook and a terrible smell wafted from the ruptured sewer lines that, along with rain, were thought to have caused the disaster. Although the catastrophe occurred suddenly, residents reported hearing and feeling the ground shaking about a month before the sinkhole appeared [source: Associated Press]. The government had plans to send a robotic camera system to investigate, but it didn't act in time.