Is a Double Hurricane Something You Should Start Freaking Out About?

Humans are great at engineering buildings capable of withstanding all manner of natural disasters. But we haven't quite figured out how to build a city that can treat a hurricane like it's no big deal. Which is why nobody living on a Caribbean island, or on Mexico's Baja Peninsula, or on the Eastern seaboard of the U.S. likes the sound of a "double hurricane."

Double hurricanes, called "proximate tropical cyclones" by meteorologists, are rare, but can occur when two cyclones spring up closer to one another than normal.

"Tropical cyclones form within larger-scale weather systems called tropical waves." says Chris Davis, a senior scientist with the National Center for Atmospheric Research in Boulder, Colorado. "A wavelength is something like 1500 miles, but it can vary. Typically, tropical cyclones form within a favorable region of a tropical wave, which means that the spacing between cyclones is usually not less than the wavelength of a wave [1000-2000 miles]. Sometimes, even the 'favorable' phase of a wave isn't favorable enough for a tropical cyclone to form, so the spacing can be even larger. Because of this, there is often only one cyclone at a time in a given ocean basin."

So, it's pretty rare for two cyclones to exist as close to each other as hurricanes Matthew and Nicole are this week, although Madeline and Lester crowded the Pacific earlier this summer, and Wilma and Alpha did it back in 2005. But if two cyclones come within about 900 miles of one another, they may display a phenomenon called the Fujiwhara effect, named after the 20th century Japanese meteorologist who first observed it. The two Fujiwhara-ing cyclones start up a humongous, terrifying do-si-do around an invisible point between them.

This effect looks totally intimidating on the radar, but don't worry: in the admittedly young history of weather tracking, this interaction hasn't yet produced a giant, pulsating mutant hurricane. Depending on the size of the two cyclones, the larger one may absorb the smaller, or if they're about the same size, this effect could fling one or both storms off course — like what happens when you're holding hands with somebody, spinning around, and one of you suddenly lets go.

A double hurricane freaks meteorologists out because it makes the paths of these storms a lot less predictable, but even the behavior of a single cyclone can be difficult to predict once it hits land. Although atmospheric currents are complex, the pre-landfall path of a cyclone is usually "steered" by the large-scale wind currents. Once they hit land, however, some cyclones weaken faster than others, and some even swing back out to sea where they stall out.

It's the rare storm that makes an abrupt turn back inland for a double-landfall on the same continent — though that's precisely what happened with the mega-destructive Hurricane Sandy back in 2012 thanks to the aforementioned Fujiwhara effect when another weather system slingshotted Sandy back towards land. Some early predictions show that Hurricane Matthew may hit the East Coast with a similar one-two punch. As with most things storm-related, though, it's an ongoing process where predictions only gain accuracy with time.

"Post-landfall behavior of tropical cyclones is under-studied," says Davis. "There are a lot of things we don't understand."

Now That's Troubling
Though we have a pretty thorough understanding of what to expect from hurricane season in the various ocean basins around the world, some researchers note these storm systems are becoming less predictable as climate change takes its toll on ocean temperatures. 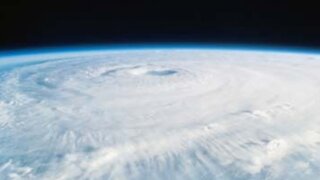 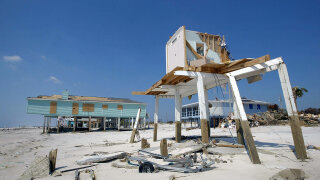